Of all the U.S. athletes who took home a medal from the London Olympic games, there are a few names that stand out: Michael Phelps, Gabby Douglas and Kim Rhode.

We adore all of these athletes, but we’re particularly enamored with gold medalist Kim Rhode, who became the first U.S. athlete to win a medal in an individual sport across five consecutive Olympic Games.

This world-class athlete didn’t just win – she thoroughly trumped her competition in London. She tied the Olympic skeet shooting record by hitting 99 out of 100 total targets. Her next closest competitor, Wei Ning of China, didn’t even come close to threatening Rhode’s gold medal with her final score of 91 targets.

Now that the games are over, Americans are honoring Rhode’s achievement and none are going quite as far as Winchester Ammunition. They’ve been sponsoring Rhode for years and fairly soon they will feature the gold medalist’s photograph on the box of limited edition Winchester AA, which will contain 25 rounds of 2 3/4 –inch, #8 shot target shells. 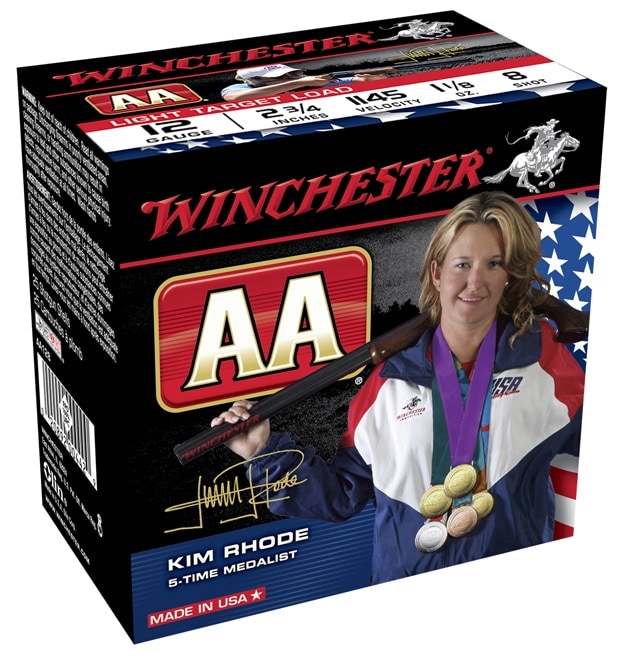 All of the credit has to go to Rhode for her practice and hard work, but she can rightly attribute some of her success to Winchester Ammunition.

The company has been sponsoring the U.S. Shotgun Shooting team since 1999, and in the last four years alone they have supplied the team with three million rounds of AA ammunition. If you practiced by running through standard 100-target skeet matches and only shot once at each target, it would take you 30,000 games of skeet to burn through that truckload of ammunition.

Winchester and Rhode are both looking forward to the new limited edition ammo boxes. The vice president of marketing and sales for Winchester Ammunition Brett Flaugher said, “Kim is an American hero and an inspiration to anyone with hopes and dreams. Kim’s career accomplishments are unmatched in Olympic competition and we’re proud to say that she shoots Winchester Ammunition.”

Rhode added, “I’m honored and humbled by the support of Winchester and excited to be on this commemorative box of AAs. It takes a lot of hard work and dedication to become an Olympic champion, and it helps when you also shoot the best ammo.”

Kim Rhode is in truly distinguished company. Winchester Ammunition has been manufacturing ammo ever since 1866 (Alaska and Hawaii weren’t even part of the U.S. back then), and they’ve only had three Americans featured on their ammo boxes: John Wayne, Teddy Roosevelt, and Oliver F. Winchester.

So, feel free to support Winchester Ammunition by picking up a few boxes of ammo. A portion of the profits will go towards the USA Olympic Shooting Team so that we can show the world what we’re made of four years from now in Rio de Janeiro, too.

While you’re at it, you should also enter for a chance to win a shooting lesson with Kim Rhode, herself. The winner will receive free travel and lodging, and will also get to run through a skeet shooting match with the best skeet shooter in history. The contest ends Aug. 31, so you’d better act fast.