Cannon Security has put together a pretty appealing nightstand package with their RadioVault, a combination electronic safe and powered speaker-equipped FM radio dock for your iPhone or iPod. In fact, at a glance, it almost doesn’t look like a safe at all.

The RadioVault can also be used as a radio alarm clock, and it will be available in either black or white to suit your preferences. The safe uses a biometric fingerprint scanner to unlock as opposed to more conventional locking systems that would make it stand out as a proper safe—the RadioVault is noting if not discreet. 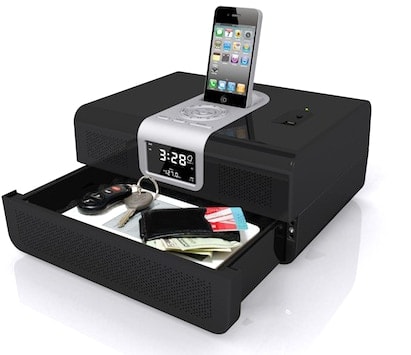 The fingerprint scanner can be programmed to accept 120 different fingerprints for multiple users. Cannon developed an algorithmic fingerprint reader that constantly updates existing fingerprints on file, so any small changes to them are stored in its memory.

It doesn’t just rely on stealth to keep your valuables safe, the RadioVault uses a reinforced steel construction to secure its contents. The mostly-hidden compartment is quite large, too, with enough room for more than just a handgun. It would also be a good place to keep some cash and important paperwork like passports, or regular stuff like wallets and jewelery. The compartment measures 9.5 inches wide, 6.75 inches long and 1.75 inches deep and has a padded liner. 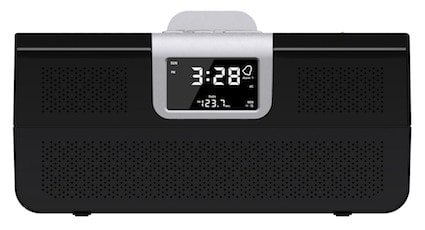 The RadioVault doesn’t need an iPhone or iPod to work, either. It can be used as a standalone alarm clock radio. But it will use your iPhone or iPad’s clock and play your iTunes music through its speakers, like most non-safe docking stations. It will also charge your devices.

We’re really impressed with this concept. The RadioVault doesn’t look much like a safe and it combines a lot of things that you really want on your nightstand or desk. We expect Cannon Security to move a lot of these things.

The only criticism we have is the location of the fingerprint scanner. While it may be on the top due to design limitations, it would be really nice if this had no visible locks on it whatsoever. It also costs $400, which may put it out of range for quite a few people.

Cannon makes a couple of other handy electronic security devices, including a wall safe and an electronic door viewer that has a pretty big leg up on the old peephole.