If You're Going to Be a Gun Rights Activists, Try Not to Make the Rest of Us Look Bad

We do not envy gun rights activists. We respect them, certainly, but they’ve got a tough job to do. Not only do they have to fight to change the minds of politicians, but they also need to educate fellow citizens about gun rights and deal with police officers.

A growing trend in gun activism (just do a search on Youtube and you can find dozens) is to strap a gun to your side, walk around town with a camera, and then throw a fuss so that you can post the video online later. These clips have the chance to go viral inherently because they’re so controversial. On one side you have a wary cop trying to get ID, and on the other side you have a citizen standing up for Constitutional rights.

Normally, we don’t mind these types of videos. They prove to viewers that they should stand up for their rights, and they often educate power-drunk cops that they can’t just trample over Fourth amendment rights, which protect against unreasonable search and seizure.

Here’s the problem, though: if your region places special restrictions on fully automatic weapons, you can’t walk around town with a semi-automatic weapon that looks exactly like an automatic weapon and then get in a huff when police want to check out the weapon. That’s just gonna make you look silly.

The gun owner in this video is carrying an MP5, a weapon that’s famous throughout the world as a 9mm German submachine gun. It does come in semi-automatic variants, but you can’t walk around with one of these and expect police to just accept your word when you say it’s semi-automatic. No matter how much rationalizing or handwaving you try to do, it just looks like an automatic gun. That’s where the “reasonable” in reasonable suspicion comes in.

We’re not trying to condemn this gun owner or anything. He isn’t doing anything illegal and he’s apparently trying to educate people about their Second Amendment rights. It’s just that carrying around an MP5 kind of misses the point. Getting stopped for carrying an MP5 doesn’t make the cops look bad – if anything, it makes the cops look good for doing their jobs well. In fact, we really have to commend the police officer for remaining so calm and professional, even while the gun owner is reciting laws, amendments, and court cases.

The gun owner, on the other hand, looks goofy for crying foul over constitutional rights when the cops clearly do have a good cause to check out the weapon. 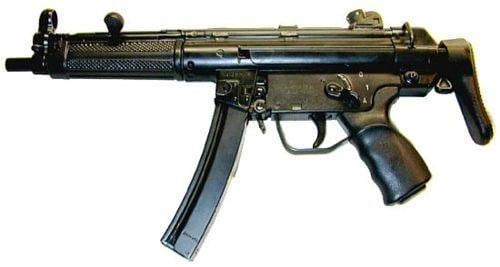 We wholeheartedly support gun rights activists and encourage you to stand up for what you believe in. Just don’t tread along the fuzzy gray line that separates illegal activity from legal activity, and then get upset when the police call you on it.

This video does bring up interesting questions about open carry demonstrations. It presents us with a sort of spectrum of protests. At one end of the spectrum you have perfectly legal activity that promotes a cause, all while trying to make the movement look good. Examples would be marches, legal assembly of members of the public to protest, or signing a petition.

On the other side of the spectrum you’ve got people who push the envelope and intentionally stir up trouble bring attention to the cause. The controversy brings more eyeballs to the cause, but it often makes you end up looking like a jerk because what you’re doing is illegal at worst or douchey at best.

Examples would be Fred Phelps (the leader of the “God Hates America” religious group), people who chain themselves to trees, or people who blow up family planning clinics.

This gun owner falls somewhere in the middle, leaning closer towards the legal side of the spectrum. What he’s doing is perfectly legal, but even to trained professionals it appears to be illegal. Is this guy on target for raising awareness about the Second Amendment, or has he gone too far by making gun owners look bad?