All across New York politicians are weighing in on the mass shooting that took place near the Empire State Building, which left two people dead and at least nine other wounded.

New York Gov. Andrew M. Cuomo, had this to say in response to the incident: 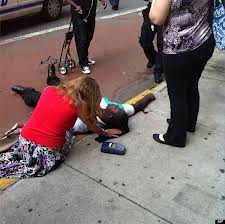 “Today’s shooting near the Empire State Building is a tragedy for New York City and our entire state… Our state has no tolerance for senseless acts of violence that harm our people, and we will do everything possible to ensure that law enforcement officials have the tools they need so residents of the city and tourists can enjoy everything New York City has to offer without fearing for their own safety and security.”

While it’s unclear what exactly Gov. Cuomo meant by “tools,” other politicians were more direct in their statements, calling for more gun control in a city that already has some of the toughest gun laws in the nation.

“For those of us in government, and in law enforcement, the news of yet another mass shooting so close on the heels of the massacres at the Sikh temple in Wisconsin, and in Aurora, Colorado, should make it crystal clear that our current laws have failed to protect the public from gun violence,” said New York Attorney General Eric T. Schneiderman.

“We must redouble our efforts to protect public safety so that New Yorkers don’t have to live in fear of the next deadly attack,” he added.

Redouble how, exactly?  Double down on the failed and constitutionally dubious stop-and-frisk initiative, which results in the seizure of a gun only about one tenth of one percent of the time?  Completely eradicate the 2nd Amendment for all law-abiding New Yorkers, so that no one but law enforcement and Bloomberg’s security detail can keep and bear arms?

“There have been far too many victims of gun violence across the country, and today’s incident points to the need for sensible gun laws that ensure the safety and security of all.”

“The tragedy is yet another horrific reminder of the urgent need to act to curb gun violence and end the bloodshed on our streets,” said Sen. Peralta.

In the past few weeks, both lawmakers drafted bills that would drastically change the way New Yorkers purchase ammo and firearms.

“My prayers go out for the victims of this morning’s horrific incident caused by yet another act of senseless gun violence, said Sen. Gianaris.  “It is long past time to fix our gun laws to prevent future tragedies from occurring.”

Sen. Gianaris is right about one thing: this was a senseless act.  But what’s equally as senseless is thinking that a law or a regulation would stop an unhinged person from committing a violent act.

From my perspective, these comments are not any more sensible than the crude, tasteless and untimely tweet posted by comedian Anthony Jeselnick in the immediate aftermath of the shooting: