The MSBS-5,56 Modułowy System Broni Strzeleckiej 5,56 or in English, Modular Firearm System 5.56, is a modern service rifle being designed at the request of the Polish military by the Wojskowej Akademii Technicznej, Poland’s Military University of Technology and the Łucznik “Archer” Arms Factory—AKA Radom, one of the most reputable Eastern-European armories in the world.

The Firearm Blog has recent photos of the MSBS in action.

Two of Archer’s rifles, the Beryl and the Tantal, are considered to be some of the best AK-pattern rifles ever made. Kbs wz. 1996 Beryl guns are the standard-issue rifles in the Polish military, and they are modified AK-pattern rifles with a redesigned barrel trunnion to accommodate a rigid rail system. 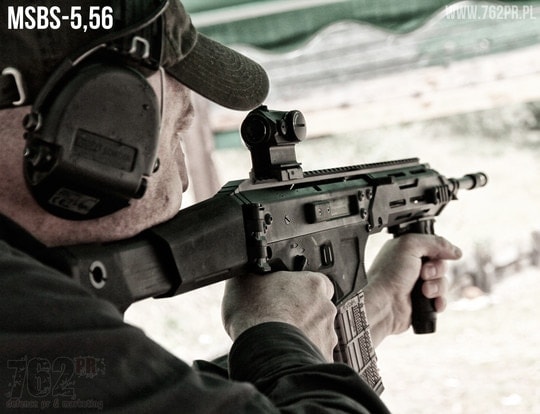 However, they’re at the end of the line with regards to the AK pattern, and the MSBS is set to completely replace not just the Beryl, but a large portion of the Polish military’s small arms.

The MSBS has a modular receiver system and can be configured for multiple roles; as a standard carbine, as a designated marksman rifle, as a light machine gun and even a PDW-style bullpup. Externally and internally, it shares features with other modern service rifle designs, including the Bushmaster ACR and the FN SCAR, but brings many changes as well.

It is a short-stroke gas-piston-operated rifle with ambidextrous controls. It can be made to eject on either side of the rifle, which is particularly important when configured as a bullpup. It appears to have an integrated ejection-port dust cover, and it feeds from standard AR-15/M16/M4/STANAG magazines. It also has a folding, telescoping stock with an integrated cheek riser. 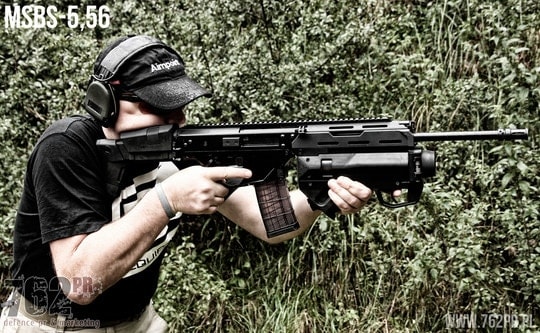 Because it is still undergoing evaluation and testing, the specifications of the MSBS are not set in stone. In its standard carbine configuration it weighs 8.2 pounds and measures 39 inches overall with the stock unfolded and fully-extended. The bullpup weighs less at 7.5 pounds and measures just 28 inches in length.

The military expects the MSBS to enter service in 2014, however, it is likely that the guns will enter mass production much sooner, along with sale to the public. Along with the rifle system, the MSBS is expected to include grenade launchers and bayonets. Future designs may add 7.62x51mm NATO to the MSBS stable, which gun industry experts agree is the cat’s pajamas.

This extremely innovative firearm system shows a lot of promise, and we hope that Archer can get to exporting them real soon, although they may have to partner with an American manufacturer to do so, as they have recently with I.O. Inc. in order to bring Beryls to the U.S. Whatever it takes, Archer. We’re waiting.

Check out the rest of the Firearm Blog’s photos here and here.