On Friday, two people were killed and at least nine were wounded in a gunfight outside New York City’s Empire State Building.

Johnson, disgruntled after being laid off from work last year, shot and killed a former co-worker with a .45-caliber semi-automatic handgun, said Police Commissioner Ray Kelly at a morning press conference.

After Johnson killed his former co-worker, he fled but was followed by a construction worker who notified officers of his whereabouts.

Once police started to pursue Johnson, he opened fire.  In the ensuing melee, multiple shots were fired.

The majority of the injuries occurred during the exchange of gunfire, and some bystanders may have been hit by shots fired by police officers, Mayor Micheal Bloomberg told reporters.

“I heard the gunshots. It was like pop, pop, pop. It was definitely in a bunch,” Dahlia Anister who works at a nearby office building, told Reuters.

When the dust settled, Johnson was dead.  His body was covered in a white tarp, at the entrance of an office building adjacent to the Empire State Building.

CNN reported that at least nine others were wounded.

Alice Ramos, a spokeswoman for Manhattan’s Bellevue Medical Center, said that it was treating six victims suffering from gunshot wounds, all of who had been at the scene of the shooting.  None of the injuries are life threatening, Ramos reported. 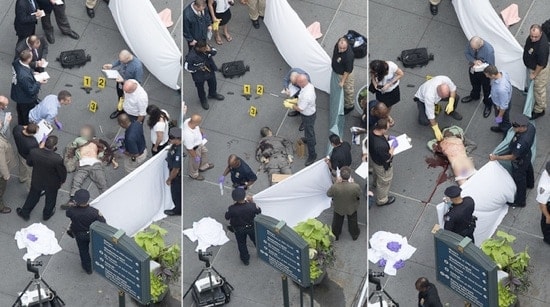 President Obama was made aware of the shooting at around 9:30 a.m., top aides told the press.  Terrorism was ruled out as a motive, authorities said.

This marks the third mass shooting of the summer, following the movie theater shooting in Colorado and the assault on a Sikh temple in Wisconsin, both of which were used as a rallying cry by gun control advocates to tighten gun laws and pass onerous regulations – like the ones that currently exit in places like New York City and Chicago.

At the press conference, Bloomberg, who is the co-founder of the most aggressive gun control advocacy group, Mayors Against Illegal Guns, did not explicitly bring up the issue of gun control and the relative strictness of NYC’s gun laws.  Instead, he stated a rather obvious point.

“We are not immune to the national problem of gun violence,” said Bloomberg.

No city is immune to it – no matter how many regulations or restrictions lawmakers pass.  Consequently, the question needs to be asked, why push for laws that only function to keep guns out of the hands of responsible citizens?

(Also at the press conference, Bloomberg mentioned something about NYC being “the safest big city in the country,” well, while the murder rate is down, the number of shootings have remained steady throughout Bloomberg’s reign, indicating that his gun control measures and his stop and frisk tactics have been largely ineffective).