In an effort to stoke the flames of the ongoing concealed-carry debate in Illinois, the last remaining state that prohibits law-abiding citizens from carrying a concealed firearm, a state attorney announced that he will no longer prosecute citizens for certain weapons possession charges when they have “no evil intent.”

“Our message is this: we will no longer use the power and authority of our office to criminalize and punish decent, otherwise law-abiding citizens who choose to exercise the rights granted to them by the Second Amendment of the United States’ Constitution to keep and bear arms in defense of themselves and their families,” said McLean County State’s Attorney Ronald Dozier in a Tuesday press release.

Dozier’s justification for not enforcing state law, which bans concealed carry and forces residents to obtain a FOID card, seems to follow the logic of the great transcendentalist Henry David Thoreau who said, “If the machine of government is of such a nature that it requires you to be the agent of injustice to another, then, I say, break the law.” 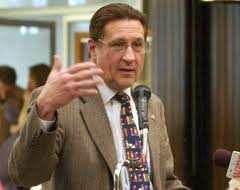 While Dozier not exactly breaking the law, as Author and American University law professor Angela Davis told the Bloomington Pantagraph, prosecutors have “absolute discretion” to decide whether to pursue charges, he is certainly refusing to be an agent of injustice.

“As the State’s Attorney, I have to make a choice. Do I continue to enforce laws that I believe to be unconstitutional, a belief that is supported by decisions of the highest court in the land, or do I continue to prosecute citizens who run afoul of state gun laws but have no evil intent or purpose in mind?” Dozier,  a retired judge who was appointed state’s attorney in December and plans to step down in October, philosophized in the press release.

“Certainly the more cautious approach to such controversial issues is to keep enforcing the law, whenever possible in the least harmful way, until enough higher court cases are resolved against them that the anti-Second Amendment folks are forced to change,” Dozier continued.  “I’m not willing to do that anymore—too many good people will be harmed.”

Dozier even pointed out what many gun owners are keenly aware of, “The result of most gun control laws is that law-abiding citizens go defenseless while criminal thugs are armed.”

Of course, Dozier was sharply criticized for his decision, not so much because he is no longer going to enforce state law as it pertains to concealed carry, but because he announced that he was doing so.

“Doing things in this manner is reckless,” chided Jason Chambers, who is running unopposed for Dozier’s position in November.  “The job of the state’s attorney is to enforce the laws of the State of Illinois.”

Chambers biggest worry is the confusion this announcement is likely to foster, both amongst law enforcement and the public.  The reality is that just because Dozier is not going to prosecute, doesn’t mean other state prosecutors will follow suit or that state law enforcement won’t seek federal charges against an individual.

“This is reckless and unfair to the public,” said Chambers, who told the Bloomington Pantagraph that he supports concealed carry, but has respect for the rule of law.

That last comment raises an interesting dilemma – that is, we all have opinions.  Should our opinions impact the way we view and abide by the law?

This, of course, has specific relevance for those who hold political office or enforce the law.  That is to say, is it civil disobedience or is it anarchy when a state attorney (or an attorney general) decides not to enforce a law?

I suppose the answer to that question often depends on – yes – one’s own opinion of the law being shelved, and not to be forgotten, what’s written in the U.S. Constitution.   Thoughts?