Israeli weapons firm Gilboa is announcing their newest product, the Gilboa 9mm, their first submachine gun. The Gilboa 9mm will no doubt be popular as it uses exceptionally-common 9mm Glock magazines. This expands neatly on their catalog of rifles, carbines and personal defense weapons (PDWs).

The Gilboa 9mm is loosely patterned of the AR-15 design. While it uses AR controls and without a doubt an AR-type fire control group, there are enough changes to it that make it a fairly unique firearm.

First up is the fact that it’s a blowback-operated submachine gun with a recoil system completely contained by the two-piece upper receiver. The 9mm does not use a buffer system. It also has both a side and rear charging handle, giving the user some flexibility in how to use the gun, as well as the option of using a side-folding buttstock. The Gilboa 9mm comes standard with a folding wire stock. 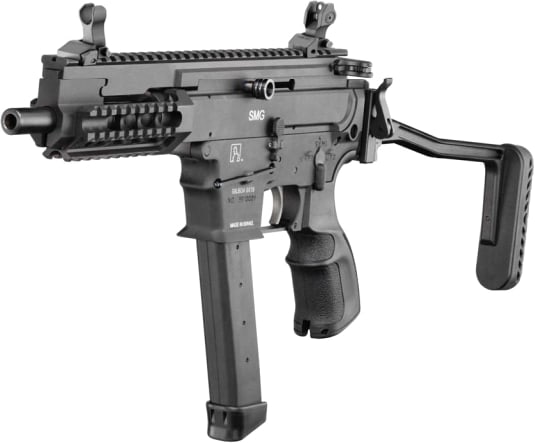 Like most AR-patterned firearms, the Gilboa 9mm has aluminum receivers that keep it lightweight. Both the upper and lower are fully-machined from 7075 T6 aircraft aluminum, made to extremely precise tolerances. It has a standard-height full-length flattop Picatinny rail for accessories like sights and optics as well as a tri-rail handguard for accessories at 3-, 6- and 9-o’clock. The magazine well is flared for easy magazine insertion and grooved to be used as a forward grip, too. 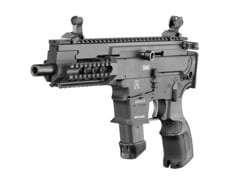 As it is, this is an interesting gun for military and law enforcement use, and we can’t help but think that a carbine version and a pistol version would also have a pretty interested market here in the U.S. Just as silencers are getting to be more popular Stateside, so are short-barreled rifles. A pistol version of the Gilboa 9mm could be converted pretty easily after getting a tax stamp and ATF approval.

Gilboa is an extension of the Silver Shadow Advanced Security Solutions Ltd. group, and is probably most famous—or infamous—for the Gilboa Snake, the double-barreled AR-15-inspired rifle. The Snake drew a lot of attention when it was launched, and managed to showcase the new firm’s design capabilities quite well. Silver Shadow was founded by a former member of the Israeli Defense Force and is committed to producing some of the best products for special operation troops as well as law enforcement officers.

The Gilboa 9mm is another interesting and far more practical addition to their line-up. We hope they get to exporting these to the U.S. soon. We’re positive that, if they prove to be dependable and affordable, these guns won’t have a long shelf life at all. This is exactly the sort of gun people will do anything to get a hold of.