On Wednesday, the Clark County Commission voted for the removal of a hillside sign facing Boulder City, Nevada, that advertises a local gun club.

The sign, which reads ‘Pro Gun Club’ (which represents the club formerly known as the Desert Hills Shooting Club) is on private property and is in an unincorporated area of Clark County, as the Las Vegas Sun Reported.  City planners had approved the sign back in June, but needed final approval from the county commission.

After discussing the matter at length with local representatives, the seven-member commission decided by a 4-3 vote that the sign had to go.

The main reason?  Well, it appears that residents of Boulder City, a small town of about 15,000 people, think the sign is an eyesore or, as some described it, a “visual blight.”

Commissioner Mary Beth Scow also claimed that the sign, which exists within her district, is “illegal.”

“It was put up without any permits and its use of natural landscape for commercial purposes is something that I feel this board should not accept,” Scow said at the Wednesday meeting.

She then questioned her fellow commissioners as to whether they would sanction the sign in their own districts.

“Would this be something you would want to accept?” she inquired of her peers.

Three others – Tom Collins, Larry Brown and Steve Sisolak – voted to leave the sign alone.  While the minority did not voice their opinion at this last meeting, in previous meetings they expressed concern about the possibility of a protracted and costly legal dispute if the commission were to demand that the sign be taken down. 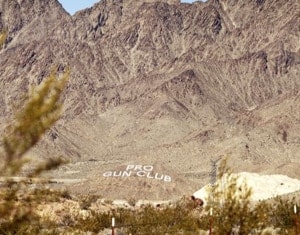 Turns out their concern had merit because the purveyors of the gun club, Pete Eliades and Sig Rogich two affluent Las Vegas businessmen, want to fight the matter out in court.  They believe the sign is necessary to draw people to the club’s remote location off the highway.

Jeremy R. Alberts, an attorney who represents Eliades told the Sun that a lawsuit is definitely on its way.

The men will try and file an injunction to stall the order for the sign’s removal, which according to county code, is supposed to happen five days after the commission’s vote.  If a judge approves the injunction, the sign could stay up until the legal battle comes to an end.

“It could be weeks, it could be years,” Alberts told the Sun of the length of future legal action.

In looking at this matter objectively, it’s difficult to discern whether residents “hate” the sign for solely aesthetic reasons or if there’s a tinge of “anti-gun” sentiment in the mix.  In short, is it just the sign and its location or is it the content of the sign that has people so agitated?  Maybe it’s both.

Either way, would you support such a sign in your community?