Rock salt shotgun shells are something of an urban myth in the world of guns. People have often claimed that it’s an effective nonlethal round, but it’s hard to tell if there’s any truth behind the rumors. One of the problems is that Hollywood got its hands on it, so you end up with wacky scenes like this one:

That’s a hell a kick for a cooking ingredient, isn’t it? This is from an over-the-top action kung fu movie, so naturally you should take the depiction with a grain of salt.

Still, you have to wonder just how viable shotgun shells filled with rock salt actually are. Can you use them as a nonlethal means of self-defense? Will they stop a criminal, or is getting shot by one of these round like getting slapped with a wet noodle? Hopefully Mythbusters will take up the quest to figure out the truth behind the urban legend once and for all, but for the time being we’ll have to rely on amateur scientists.

Old_Painless of The Box O’ Truth set out to document his very basic experiment with rock salt shotgun shells. He doesn’t rigorously follow the scientific method (we need multiple trials to make sure that his experiment wasn’t a fluke), but he documents the everything thoroughly enough that we can probably take it at face value. 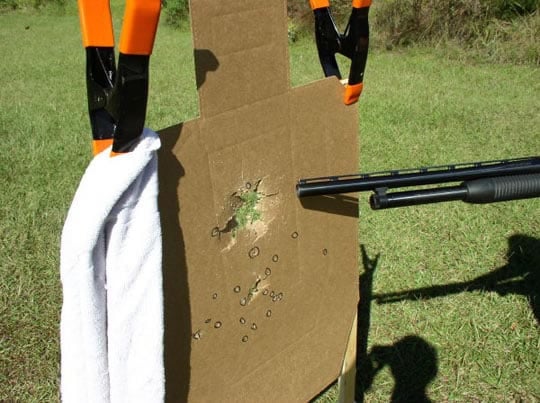 He started off by emptying shotgun shells and replacing the shot with basic, run-of-the-mill Morton rock salt. He then fired the shells at different distances to see just how dangerous rock salt can be.

So, is rock salt a reliable option for nonlethal self-defense? It doesn’t look that way. If Mr. Badguy were charging at you and you blasted him with a load of rock salt, all you’d probably manage to do is give him an irritable stinging sensation and piss him off even more. If your opponent is within 10 feet of you then things might go a little differently. Sure, you can probably knock him on his ass and neutralize the situation without taking a human life, but we’re not sure we’d advocate betting your life on a handful of salt. Think about it this way: if rock salt fails at 10 feet, then you have only one or two seconds before your opponent is on top of you.

There is one advantage of using rock salt shells, however. Based on Old_Painless’ experiment and a few videos from around the web, we can be certain that rock salt shells have virtually no recoil whatsoever. It’s that whole “equal and opposite reaction” rule — there just isn’t enough mass moving forward to push the mass of the shotgun backwards.

So, our final verdict is that you shouldn’t count on rock salt. You could certainly scare off some wild animals or use it to discourage people from picking a fight with you, but don’t stake the life of your family on something so unreliable.