California has just scored a major victory in the war against gun violence by pushing AB 2333 through the Senate. This landmark bill should protect the lives of innocent children by shielding them against truly dangerous weapons.

So, what will this new bill do? Outlaw grenades? Ban machine guns? Monitor weapons-grade uranium? Not quite – it will fine parents whenever their children show BB guns in public.

You know, a great way to discredit somebody is to hit them with a slippery slope fallacy. That’s when you make increasingly absurd predictions to make the argument sound silly, like “If you let California outlaw guns, then next thing you know they’ll outlaw BB guns, and then knives, and then forks!” None of us really expected them to ever go that far. Well, it looks like we’ve vastly underestimated the determination of California lawmakers.

The bill, which is being championed by Assemblyman Jose Soloraio (D-Anaheim), will slap parents with a $100 fine whenever their children display BB guns in public. Second and reoccurring offenses will increase the fine to $200.

It’s almost a relief to know that California legislators aren’t trying to throw parents in jail for BB gun possession (unlike this NJ law), though handing over a hundred-dollar bill every time your kid is careless might be enough to persuade parents to keep BB guns permanently under lock and key.

We’re going to play devil’s advocate for a little bit and acknowledge that there have been a few injuries and fatalities related to BB guns. Back in 1999, a 13-year-old boy was shot with a BB gun. The projectile became lodged in his brain, and he eventually died from his injuries.

Daisy Red Ryder, the manufacturer of the BB gun, settled the case (and several others like it) for millions of dollars.  Proponents of the bill also point to cases like this one wherein police have mistaken toys for actual guns and opened fire on children. 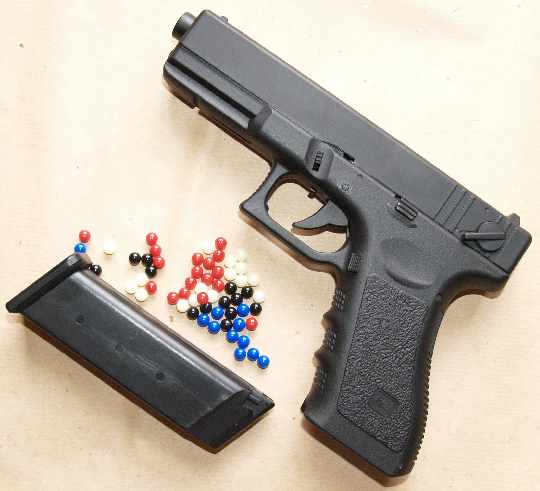 Daisy Red Ryder’s defense has always been the same: don’t go against the instructions on the package and don’t shoot other people. Duh.

Republican Sen. Doug LaMalfa was dumb-struck by the bill. He said, “Back in my day you could jump on your bike in the morning with your BB gun and drive all around the neighborhood or up through the hills and do what you do, a little plinking here and there, and it wouldn’t hurt anybody now at this point we’re going to make criminals out of people for not properly storing a BB gun.”

LA Times writer Patt Morrison agrees that the BB legislation is silly and argues that the legislators are just taking out their hatred of guns on anything that resembles firearms. His solution, though, is to save BB guns from restrictions by placing more bans on actual guns.

“If we could be pretty certain, as we were ‘back in the day,’ that it really was just a BB gun that kid was carrying, because no one could legally get his hands on a real assault weapon, then kids might be freer to jump on their bikes and ride through the hills doing a little plinking,” he said.

Gun rights advocates (and BB gun rights advocates) may need to speak up if they want to stop this bill in its tracks. The only problem is that they’ll need a solid argument. After brainstorming all morning, the best argument we can come with is, “But that’s just ridiculous. No, seriously. Take a step back and look at what you’re actually doing. It’s just. Plain. Ridiculous.”

There’s still a short window to ridicule CA legislators before this bill becomes law. AB 2333 may have squeezed through the Senate with a 21-17 vote, but it will have to survive another vote by the Assembly before it could move to the Governor’s desk.

You know, just about everybody will agree that the bill is ridiculous. The only question is whether or not the bill is justified in spite of it being ridiculous. Laws against running around town nude are also a little bit goofy, but every once in a while we’re glad we have them. Is this bill actually reasonable? Is it logical that California restrict BB guns in order to remain consistent? Or is all of this rigmarole over children’s toys really as stupid as it sounds?