PNW Arms of Potlatch, ID, has developed a promising new bullet design for shooting through water. These individually-machined bullets can travel many times farther through water than conventional bullets via supercavitation.

Their first design is a very long, hollow and heeled .308-inch diameter bullet for .308 Winchester cartridges. It appears to be a brass bullet, similar to long-range precision target ammunition, and turned on a lathe to meet more exact tolerances than swaging can provide.

The shape of these bullets causes a bubble of gas—water vapor—to be generated and trapped around them while underwater. This bubble has far less drag on it than water against metal, and with just the point of the bullet in contact with water, they can travel through a lot more water than your run of the mill softpoint.

Early tests have the bullet being effecting against targets through as much as 15 yards of water. To put it into perspective, most bullets either slowed to the point of ineffectiveness or fragmenting entirely in just a few feet of water. This video shows PNW Arms’ passing through 13 gallon bottles of water, clean through a steel plate then through a final 14th jug. A standard rifle bullet wouldn’t pass through half of the jugs. This is one of the more impressive demonstrations of this type of ammo that we’ve seen to-date—the music doesn’t hurt.

Making ammunition that’s effective through water has been a technical and tactical milestone that has been hard to reach. Many attempts have been made to make any type of multi-shot projectile weapon work underwater, and most of them never succeeded. The fact that this bullet design supercavitates the water separates it from other designs greatly. 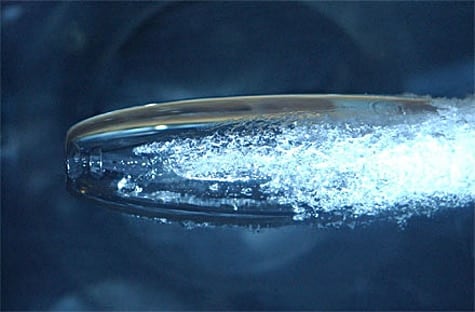 Most other types of underwater ammo depend on high ballistics coefficients to reduce drag; they’re essentially just darts. By travelling with a pocket of vaporized water these bullets can far exceed the ranges of more predominant underwater weapon systems. That and, having a lot in common with target ammo, these bullets are also very capable above-water as well.

So it isn’t just about fighting underwater James Bond-style. Troops of all stripes have had to cross bodies of water and face enemy fire, and it isn’t practical to have to switch between your rifle and your harpoon gun depending on what you’re facing.

Clearly, this is something the Navy and the Marines are interested in. But it’s not just for small arms. Effective underwater ammunition can be deployed against torpedoes, adding a layer of active defense that has the potential to save an extraordinary number of lives.