Some guns come and go from this world and very few people ever remember them.  Rightfully so.  Most are abominations of one kind or another.  Other guns disappear, but still change everything in their wake.  Such is the case with the HK VP70.  Heckler and Koch’s Volks Pistole.

We don’t remember the VP70 because of its strange look.  The lines are reminiscent of the Mauser HSC.  This is logical, as HK grew out of the old Mauser company after World War Two.

In many ways, the VP70 was a nod to the past.  The 9mm, for example, had been around for a long time.  The stock-as-useless-holster idea is also familiar, only this time with the old Mauser C96–the broom handle.

The VP70 holds 18 rounds of 9mm.  It is a simple blow-back action.  Nothing new.  It is striker fired and double action only.  While all of these things are popular enough, we remember the VP70 because it was the first polymer framed pistol.

Information on the VP70 is hard to come by.  In fact the information can be a bit misleading.  It starts with the name.  The HK we understand.  The 70 part is easy enough, as the gun was designed in 1970.  HK says the VP of the VP70 means Volks Pistole or People’s Pistol.

This is an interesting idea.  Steve Galloway, Director of Marketing at Heckler & Koch, says the VP70 was designed as a “stay behind” gun.  It was meant to be a weapon “for the resistance.”  Cold war resistance.  When the Soviets over ran West Germany, those that decided to stay and fight would have VP70s to fight with.  The gun was light, small and economical.

Most of the VP70s made (those with the M, for Militar) came with a combination holster/stock.  When attached, the stock allowed for select fire.  Three round bursts.   This is where another (erroneous) name for the pistol comes from.  Vollautomatische Pistole.  Machine Pistol. The VP70M has a cyclic rate of 2,200 rounds per minute, would provide dependable firepower. 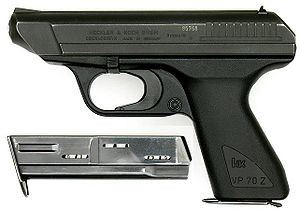 But the VP70M was not available to civilians.  Where there were not prohibitions against owning 9mm pistols, HK sold the VP70Z (Z for Zivil), a civilian model without the select fire stock option.

The VP70 is available in a couple of permutations, including 9×21 (an Italian variant on the 9×18).  Those were not select fire, and so they show up for sale in the states sometimes.

But let’s get back to the ways it was innovative.  Polymer.  The VP70 is a really important footnote in the history books.  And it makes an interesting piece for a collection.  That’s what they are now: collectors’ guns.

The VP70 is reported to have a very stiff trigger pull.  It is large (eight inches long), and it doesn’t have sights that can be replaced.

Still, clean VP70s will sell for anywhere from $400 to $700.  That is for the VP70Z (the civilian model legal in the U.S.).  The select fire versions are much more trouble, as they fall under legislation governing automatic weapons and short barreled rifles.

For the rest of us, I guess we know who to thank for polymer pistols.  Or maybe who to blame, depending on your point of view.  Still.  If the cold war Soviets do make a come back, I’m not going to complain about a plastic frame.