“Cha-Ching!” might be the best way to describe international weapons sales by the United States in 2011. 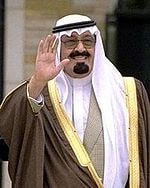 According to a report published by the Congressional Research Service (CRS), the U.S. “dominated” the international arms trade market in 2011, selling $66.3 billion of weapons overseas, the “largest for a single year in the history of the U.S. arms export program.”

To put that number in perspective, the value of all government-to-government weapons sales or, as its officially known, “arms transfer agreements” worldwide in 2011 was $85.3 billion, which means that the U.S. accounted for 77.7 percent of all such agreements.

So what explains the “extraordinary increase” in arms transfer agreements from 2010 to 2011?

In 2011, Saudi Arabia was by far the biggest arms buyer among developing countries, concluding $33.7 billion in weapons deals – 99 percent of which were made with the United States.

What do these three nations have in common?  As the authors of the study underscored, they’re “all pivotal partners in the U.S. effort to contain Iran.” 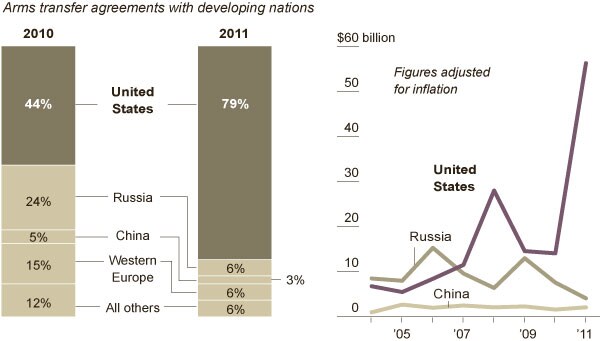 As far as the other leading exporters, Russia ranked in a distant second behind the U.S. with $4.8 billion in agreements, down significantly from the $8.9 billion in 2010.

Aside from the outliers, the U.S. on the sales end, Saudi Arabia on the purchasing end, the international arms market is not likely growing overall, but has instead – due to a weakened global economy, the Eurozone financial crisis and concerns over domestic budget problems for prospective purchasers –plateaued and in some cases decreased, the report found.

As such, many nations are seeking to fix what they already got instead of buying some new and fancy weapons system.

“Some nations have chosen to limit their purchasing to upgrades of existing systems and to training and support services. Others have decided to emphasize the integration into their force structures of the major weapons systems they had previously purchased,” the report said. 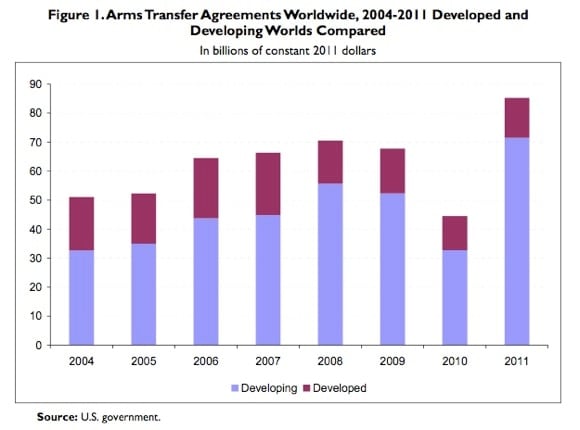 As pointed out by Reuters, the Key U.S. weapons sales in 2011 included:

There’s a lot of information here, but one question emerges – will the Saudis end up using these weapons against Iran?