Violence is a major problem in Chicago.  Last weekend alone, there were at least 46 shooting victims in the Windy City, nine of which were fatally wounded.  Obviously there are many questions, chief among them, how does the city curtail the violence?

While the answer to that question remains elusive, one problem the police have solved recently is where these crime guns are coming from.

As it turns out gun dealers in suburban areas are a main source for the guns found at crime scenes in the city, according to a recent study published by the Chicago Police Department.

In a breakdown of the report, the Chicago Tribune wrote, “29 percent of the guns recovered on Chicago’s streets between 2008 and the end of March were bought in the Cook County suburbs.”

“Lake County, Ind., was the second largest source, accounting for six percent of the weapons, and other counties surrounding Chicago – including Lake County, Ill., and Will, DuPage and Kane counties – were also in the top 10 sources,” the Tribune stated.

To give one a visual rendering of those numbers, consider this graph produced by Atlantic Cities: 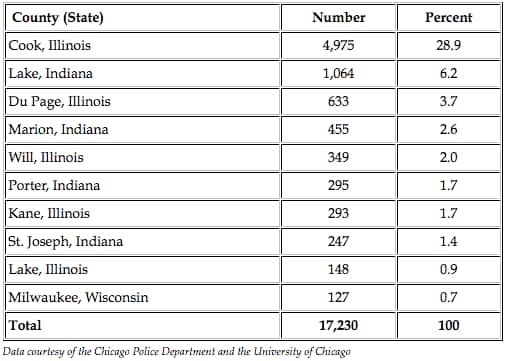 As for how the study was conducted, the CPD received the tracing data from the Bureau of Alcohol, Tobacco, Firearms and Explosives and then sent it to the University of Chicago Crime Lab for analysis.

Seth Bour, the Crime Lab’s deputy director, told the Tribune that the study covered 17,230 guns successfully traced by the ATF between Jan. 1, 2008 and March 31, 2012 after the weapons were recovered at crime scenes in Chicago.

The figure (17,230) represents just a portion of the total guns recovered, many of which cannot be traced due to a number of factors, Bour added.

Another fascinating discover was that two gun shops, one in suburban Lyons and another in Riverdale, accounted for more than 10 percent of the guns recovered.

However, experts are quick to point out that without proper evidence that gun shop owners are guilty of wrongdoing, one should not read too deeply into the numbers.

“The numbers don’t mean gun stores are violating any rules, as guns are often stolen from their legal owners or bought by ‘straw purchasers’ who pass them to criminals who would be prohibited from buying firearms,” Crime Lab executive director Roseanna Ander told the Tribune.

Therein lies one of the major problems of solving gun violence: catching or thwarting straw purchasers.

If an individual has a clean record with no history of violence or mental illness, how can the state of Illinois stop him/her from purchasing a firearm from a licensed dealer and then selling it off to criminal?

Unfortunately, the answer is it can’t, really — at least not without going Orwellian, i.e. trampling on the Constitution and ramping up public surveillance to the point of being oppressively in the face of every gun owner, at all times.

Even if Illinois were to take an Orwellian approach to gun ownership (more so than it already has with FOID), it still wouldn’t stop out-of-state straw buyers from bringing guns to the city, as the CPD study also proved. 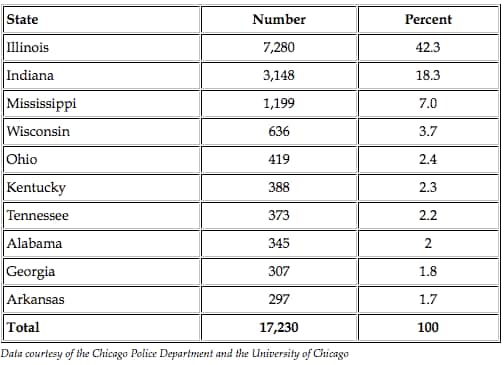 So, where does that leave the Windy City and its problem with violence?  What should be done to address straw purchasers?

From my perspective, Chicago’s got a gang problem, not so much a gun problem.  As we all know, gang violence is fueled by the drug trade.  If I were a Chicago politician I would seriously consider creating legislation to legalize drugs.

In lieu of that, I would at least acknowledge that the current approach of “doubling down” on gun control is not working.