A few of our readers might remember the nifty Glock modified to look like a power tool. Well, we managed to find its counterpart – a drill that looks like a gun.

Gadgets and Gear touts this gizmo as “the ultimate power tool for the ultimate man.” We’re not really sure what an ultimate man is (Neil Armstrong? Guys in cologne commercials? The Hulk?) but we can kind of see where they’re coming from. Guys like power tools. Guys like guns. Roll both of those stereotypes into one neat little $39.95 bundle and how can you possibly go wrong? Now, if only they could figure out how to cram beer and football into the deal. 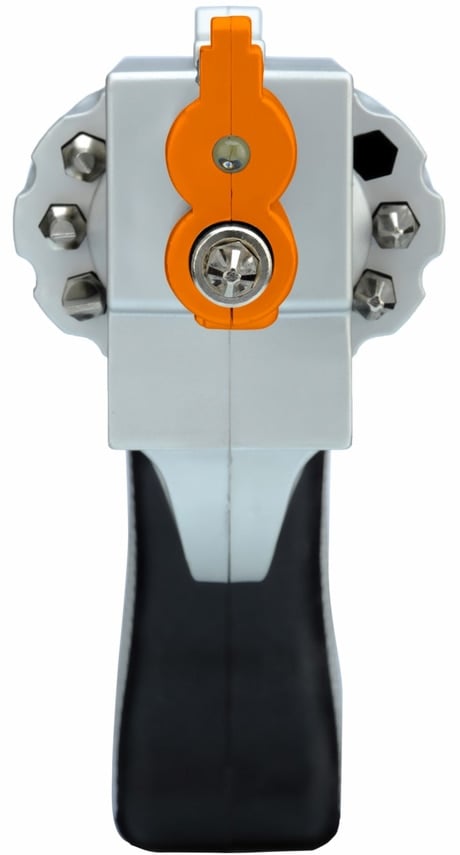 It’s an interesting device, but it’s definitely more of a novelty item than a useful power tool. It does everything that you’d expect a typical power screwdriver to do, but its slightly clunky shape will make it less useful than store-bought models. There’s a good reason why most power screwdrivers are long and slender – it’s to get into all of those hard-to-reach places without snagging on something.

The one neat thing about this gadget is that it stores the extra drill bits in the gun’s chambers, with three on one side and three on the other. Assuming those bullet chambers continued above and below the gun, we’d have to estimate that this gun drill would be about a 12-shooter.

The manufacturers went out of their way to make sure that nobody would ever mistake this device for a real gun with its beak-like orange barrel. That only makes it semi-useful in a self-defense scenario. You won’t fool any bad guys into thinking that you’re pointing a gun at them, but at the same time a guy wielding a cordless power tool is still pretty freaking intimidating. Stick with guns when you’re trying to protect your family, but if there aren’t any guns handy then this pseudo-gun should still do a decent job against unarmed attackers.

You may want to grab one of these while you have the chance – either for yourself or for a gun-loving do-it-yourselfer in your life. The site claims that the “response has been overwhelming. Reserve one today before they’re all gone!” That might just be a marketing gimmick to get you to fork over your money, but they could be telling the truth. It’s also quite possible that they’re afraid of California legislators and the website want you to grab one before Californians make gun drill possession a third degree felony.

In fact, we think that one of the California councilmembers found this page already and posted a reply: “We have so many killing machines now we also have to have a “killing drilling” one. what a shame.” Sorry that this drill doesn’t meet your approval, random guy on the Internet, but we’re not going to let your poo-poo attitude spoil our delight in this obviously tongue-in-cheek novelty item. Where’s your sense of humor?