I’d like to begin by acknowledging the severity of house fires.  They are dangerous and often claim lives.  I lost a cousin in a fire not long ago.  Fire is not a trivial matter, and I don’t want any part of what follows to seem, in any way, like I’m misplacing my priorities.

What makes a safe stand up to a fire?

Let’s assume you have an emergency action plan, adequate insurance and a support network of friends and family who will take you in. 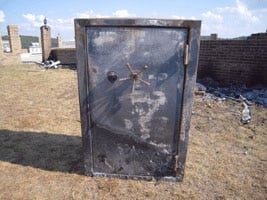 Everything is in order.  But you want to protect as much as possible, including your guns, and so you would like to have a good, fire resistant safe.  What should you consider?

Let’s begin again with this question, again: “what are you trying to protect, and from what?”

Like many Guns.com readers, I’m less concerned about safe crackers than I am about fire.  For several years now, I’ve lived in a house heated with wood.  It is an old house, with old wires.  We live far enough from emergency services that it might take a fire truck half an hour to respond to a fire, and, once they did arrive, they wouldn’t find much water.  So when I look at safes, I always check the fire rating first.  But this can be a bit confusing. 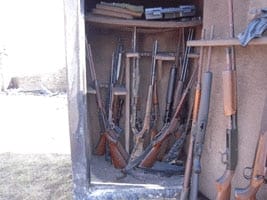 Let’s be perfectly clear about this.  No safe is fire-proof.  They will eventually burn up.  Steel melts (though house fires usually don’t get that hot).  The layers of insulation, no matter what they are comprised of, will eventually fail.  And when they do, your UL rated Residential Security Container becomes an oven.  If any oxygen is admitted, it becomes a kiln.

But there are ways to slow down this failure.  You have to have enough various combinations of protection to stand up to the worst possible fire.

A good place to start is the way the safe is built.  We covered a bit of this in the last installment about home security.  Thick steel heats up more slowly, so 10 gauge steel will provide a bit more protection than 12 gauge.  Running welds (as opposed to the dubious, crappy stitch welds, which are back filled with Bondo) prevent air from entering the inside of the safe.  A snug fitting door will also help seal things up good.  These things are important because they keep air out.

But there are some details to look for that we haven’t yet covered.

Beneath the exterior shell of the safe, there should be some form of insulation.  Most companies now use a form of firewall (some call it fire board — critics call it drywall).  This comes in sheets that are cut to size and fitted inside the walls, ceiling, floor and door of the safe. 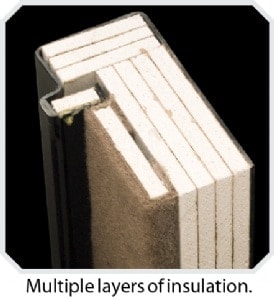 This is a sound defense, and a good insulator — especially when used in layers.  Critics of the firewall approach say that, when heated, it releases moisture.  When this moisture is gone, the board becomes brittle and may lose its structural integrity.  It is possible that it will then crumble and slough off into the bottom of the safe.

Possible, but not highly likely.  Firewall has its faults, but has been proven to be effective.

Some companies use poured slurry, sort of a concrete mixture, but it is very similar in composition to firewall.  Others use ceramic wool insulation.  This is very effective and expensive, and it takes up a lot of space inside the safe.  But it won’t crumble.

Many people still opt to put a smaller insulated box inside the safe — something designed to safeguard documents — as an extra form of precaution.

Michael Sweeten, the Product Manager at Browning ProSteel Safes, says that Browning tested many different types of insulation before deciding on fireboard.  The final decision was that the fireboard is a better option.  Tests showed it performed equally well, and is less expensive and easier to install, which keeps cost down.  The benefits of other methods didn’t warrant the increased cost.

Exterior hinges, never internal.  No matter how unsightly, exterior hinges allow for tighter tolerances inside the safe.  Internal hinges have large air spaces around them and provide failure points, no matter what type of insulation is used.  Even if a burglar knocks the hinges off of a solid safe, especially one with active bolts on all four sides and corners, he will be no closer to opening the door.

Where you put the safe

This is another piece of advice I picked up from Sweeten: pay attention to where you place the safe.  If it is on an upper floor, and the house burns, it may fall through the floor.  What will it land on?  A perfectly well insulated safe may lose structural integrity if it is heated up and then dropped onto something that might bend open a door.

But putting a safe in the basement isn’t always the best answer, either.  What might fall on top of it?

Ideally, a safe should be air and water tight, even though it’s nearly impossible.  However, a good tight fit is not. This keeps air circulation to a minimum.  But fire destroys gaskets, making it very easy for air transfer.

Palusol makes a seal that expands when it is heated.  This plastic like substance serves as the gasket on many safes now and works well to seal a safe up tight in a fire.

There are no standards for testing fire resistance in the gun safe industry.  This is a huge problem because it makes deciphering marketing claims really difficult.  I would not buy a safe designed for fire resistance without asking about the safe company’s testing procedures.

Let’s pretend that a company claims that there safe is rated for 30 minutes at 1200 degrees. Here are some questions you might want to ponder.

Does this mean it was tested at 1200 degrees for 30 minutes? It should.  Sometimes it means that it was baked at varying temperatures, but the test was stopped when the temperature reached 1200 degrees (and it may have taken the 30 minutes to get it that hot).

Where did they place the heat sensors? Some place them on the floor of the safe.  As if.  Sensors need to be placed in the top, and middle to determine a range of protection.

Was the safe standing up, or lying down? In order to make some claims, certain companies have been known to use fraudulent testing methods.  Be wary.  It doesn’t do anyone any good to place the sensor in the top of the safe, if the top of the safe is on the floor of the kiln.

Browning has a kiln on site.  When they test a safe, they fire up the burners and bring the kiln to temperature in under five minutes.  The safe is then allowed to soak at 1,200 degrees.  The goal is to keep the internal temperature safe enough that the safe’s contents won’t be destroyed.  When the interior temperature gets above 350 degrees, the test stops and the time is calculated.

I think what Browning ProSteel Safes does with their insulation and testing is practical.  Yes, more could be done.  But at what cost — and with what benefit?  Browning’s protection methods are honest and transparent.  That deserves respect. 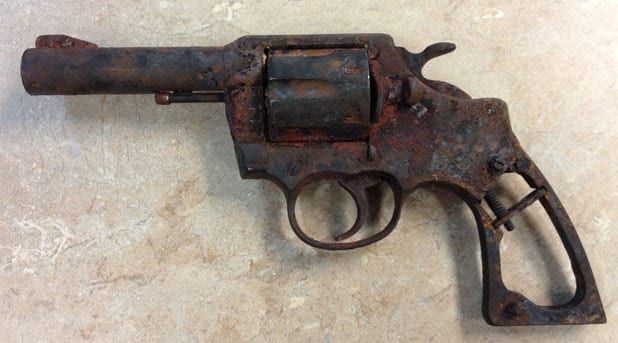 In the end, you have to have enough protection for the worst fire you might have. Take this gun for example.  It was reported to have burned inside a Liberty Safe rated for one hour of protection.  That is not a reflection of a poorly made Liberty Safe.  It is a reflection of the intense heat and exposure of the Waldo Canyon fire.  If the safe can only withstand an hour, and the fire burns for several hours, this is what happens.  Hard to prevent this sort of thing.

Just be weary.  Every company wants to sell you something.  After several weeks of research, this is what I’ve found.  If a safe company does fire resistance differently, they will try to convince you that their way is the only way it can be done.  Not so.  They’ll point out failures in others’ designs, or materials, sometimes distorting facts or using misleading examples.  Take marketing for what it is.  And if they seem to be cagey about answering any of these questions, walk away.

Photo credit: Whistling Pines Gun Club, and Prosteelsecurity.com (where you can read a testimonial about the burned safe in the pictures above).