New Laws Give Missouri Gun Owners Something to Smile About

This past Tuesday, a huge list of laws longer than your rifle just went into effect. It mostly contains a bunch of snooze-worthy legislation about license plates and highways, but it does include a few tidbits that should be interesting for Missouri gun owners. Even if you don’t live in Missouri you should still check it out — these new laws strip away gun control restrictions.

The biggest victory for gun owners comes from HB 1657, which makes it easier for some people to obtain concealed carry endorsements and gives people with CCW permits more freedom.

The bill allows members of the United States Armed Forces to receive a concealed carry endorsement starting at age 18 rather than age 21. The idea behind it is hey we trust these servicemen and women to operate military-grade weapons, then it’s certainly reasonable to allow them to carry concealed weapons. After all carrying a hidden pistol can’t be any worse than driving a tank. 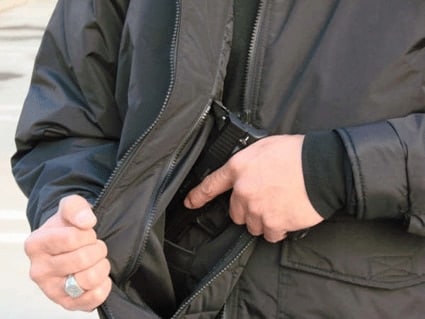 This extra leeway also applies to spouses of service members stationed in Missouri and individuals who have been honorably discharged and have assumed residency in Missouri.

The other major breakthrough for gun rights advocates is how the new laws change how the state handles concealed carry restrictions. People with a valid concealed carry permit and who legally carry a firearm may “briefly and openly display the firearm to the ordinary sight of another person, unless the firearm is intentionally displayed in an angry or threatening manner, not in necessary self-defense.”

One thing we’re really curious about is just how long “briefly” is. Ten seconds? Five minutes? An hour? We dug through the wall of text explaining the nitty-gritty details of this law, but the official wording in section 571.037 (see for yourself) is equally vague.

These new laws have been in effect for a few days now, but keep in mind that you can get grandfathered over if you took care of all of the paperwork before Aug. 28. Missouri residents can receive a concealed carry endorsement without meeting the new legislation’s requirement as long as they submit a certificate of firearms safety training course completion that was issued before the 28th. That’s mostly just a courtesy, though. These laws removed restrictions from gun ownership rather than adding more on, so getting grandfathered over doesn’t really offer a lot of benefits.

It’s nice to have this news to counterbalance the craziness happening over in California. This legislation is the most recent in a long line of gun rights legislation in Missouri, prevents discrimination against gun owners or one that allows concealed carry on city trains and buses.

Missouri is really on a roll — let’s hope they keep it up!