By now, you’ve probably heard about some of the ‘juicy’ details in the book, “No Easy Day,” which gives a firsthand account of Operation Neptune Spear, the raid on Osama bin Laden’s compound in Abbottabad, Pakistan.

If you haven’t, here’s a quick rundown of the controversy the book and its author, former Navy SEAL Matt Bissonnette aka ‘Mark Owen’ (a pen name) has generated.

First, there’s the incongruity between the author’s account of what happened that fateful night in early May of 2011 when SEAL Team Six or DEVGRU (United States Naval Special Warfare Development Group) killed bin Laden and the narrative the government fed to the public.

The Associated Press, which obtained a copy of the book, recapitulated Bissonnette’s account of the mission in the following manner:

“Bissonnette says he was directly behind a “point man” going up the stairs in the pitch black hallway. ‘Less than five steps’ from top of the stairs, he heard ‘suppressed’ gunfire: ‘BOP. BOP.’ The point man had seen a ‘man peeking out of the door’ on the right side of the hallway.

“The author writes that bin Laden ducked back into his bedroom and the SEALs followed, only to find the terrorist crumpled on the floor in a pool of blood with a hole visible on the right side of his head and two women wailing over his body.

“Bissonnette says the point man pulled the two women out of the way and shoved them into a corner and he and the other SEALs trained their guns’ laser sites on bin Laden’s still-twitching body, shooting him several times until he lay motionless. The SEALs later found two weapons stored by the doorway, untouched, the author said.”

Now, the discrepancy lies in the details.  The government’s narrative claimed that the SEALs had shot bin Laden only after he ducked back into the room because they feared he was reaching for a weapon.  A small difference in story, but a difference nonetheless. 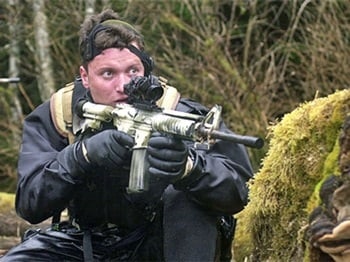 However, whether they shot him when he first peaked his head over the ledge or whether they waited until they confronted him inside the room, really doesn’t make much of a difference in terms of the legal ramifications for the operatives, as one expert explained to the AP.

“It wasn’t unreasonable for the SEALs to shoot the individual who stuck his head out,” said the former JAG, retired Maj. Gen. Charlie Dunlap, a Duke University law school professor and a former deputy judge advocate general for the Air Force

“In a confined space like that where it is clear that there are hostiles, the SEALs need to take reasonable steps to ensure their safety and accomplish the mission,” Dunlap said.

Dunlap also added that shooting him dead while he was on the ground was also reasonable to keep the terrorist mastermind from possibly blowing himself up or getting a weapon.

Yet some believe that this new information may cast doubt about whether the mission was really a “capture or kill” mission or just a “kill” mission.  To that point, Bissonnette said in the book that the SEALs were told by a lawyer prior to the mission that if bin Laden was “naked with his hands up,” they should not engage him.  In short, if they could take him alive, they should.

The Pentagon did not comment on the situation except to iterate what it has said in the past, “As President Obama said on the night that justice was brought to Osama bin Laden, ‘We give thanks for the men who carried out this operation, for they exemplify the professionalism, patriotism and unparalleled courage of those who serve our country,’” National Security Council spokesman Tommy Vietor told the AP in an email.

What did the Operatives think of the Commander in Chief?

While SEALs tend to be apolitical, at least publicly, Bissonnette offered some insight into what the operatives think about the Obama Administration.

Apparently, after the raid, one SEAL Team member said something along the lines of, “we just got Obama re-elected.”  Additionally, there were complaints from operatives that Obama would take credit for the raid, using it for political advantage (we’ve heard the catchphrases, “bin Laden is dead, GM is alive”).

However, Bissonnette did commend the president for green-lighting the operation.

Vice President Joe Biden also made his way into the book’s pages.  According to the AP, Bissonnette, upon meeting him after the raid at the 160th Special Operations Aviation Regiment, said that Biden told “lame jokes” no one understood, reminding everyone of “someone’s drunken uncle at Christmas dinner.”

Bissonnette is an America hero, no doubt about that.  Nevertheless, he is being criticized for circumventing the usual Pentagon review process that all military books containing sensitive and potentially classified material are subject to.

U.S. Military officials did not know about the books publication until it was reported in the media.  They are now looking at the manuscript to determine whether Bissonnette violated military policy.  If he did disclose something he shouldn’t have, then the government could take legal action.

When asked to comment on the matter, Bissonnette told the AP that he did “not disclose confidential or sensitive information that would compromise national security in any way.”

It should also be noted that all the proceeds of the book go to wounded veterans and their families.

The book will be released on Sept. 4, a week earlier than was initially planned (due to an overwhelming demand for it).