Everybody's doing it, why not YHM: Introducing the SOC-150 'Zombie Hunter'

For all its detractors fans of the zombie apocalypse keep growing in number, like some kind of, you know, epidemic. Yankee Hill Machinery, one of the more respected and exceptionally serious and professional firearm manufacturers has caught the bug and clearly has a full-blown case of undead fandom.

Introducing the new SOC-150 “Zombie Hunter,” a heavily-featured AR-15 that is incredibly, even unbearably green.

Yes, the most powerful aspect of this rifle isn’t the projectiles it punches no-doubt extremely precise holes with, that doesn’t even compare with the excitingly, brilliantly green zombiecam finish. The SOC-150 is outfitted with an isotropic hydrographic green and black living dead motif called Reaper-Z by Proveil, with the horde tearing across the rifle.

For all the modern camp, the Zombie Hunter is an inspired rifle, and we’re not talking about the zack-themed pattern. The SOC-150 lives up to YHM’s outstanding standards. It’s a mil-spec carbine with a 16-inch diamond-fluted free-floated barrel with your choice of 1-in-7- or 1-in-9-inch rates of twist, a mid-length competition handguard and a low-profile gas block beneath that.

The fluting not only adds to the barrel’s 4140 heat-treated steel strength, with a Rockwell Hardness of 25-32, it increases the surface area which improves its heat-dissipation properties, meaning you can shoot longer and more accurately. 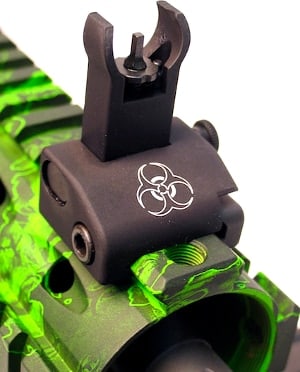 The SOC-150 has custom quick-deploying backup iron sights and a matching custom barbed flash hider. The custom flash hider, named “the Annihilator,” is a modified YHM Phantom that “is more suitable for close combat situations, and still eliminates over 99% of flash.” About the only thing that doesn’t come from the YHM shop is the M4 pistol grip and collapsible buttstock. While they may be service-rifle standard, they do match the rest of the rifle’s Reaper-Z finish.

The rifle is chambered in 5.56 NATO “so ammo will be easy to find after the fall of humanity,” and of course to work with commonly-available AR-15/M16/M4/STANAG magazines. You can see all the other details and specifications on the Zombie Hunter product page over here.

Being a Yankee Hill rifle, the SOC-150 is not inexpensive. If you’re looking for a blazing radioactive emerald green zombie brain-blasting machine, be prepared to cough up $1,550.

But if you wanted to save a little scratch—or rather you like this rifle but could do without the dazzling, and possibly blindingly-green zombiecam—you should check out YHM’s Specter rifles. They share many of the same features and specifications and come in what is comparatively benign black. They also run $1,425 or less, although they don’t have the custom Zombie Hunter sights or flash hider.