The good people at the Mousegun Addict blog have done some external ballistics testing with Lehigh Defense’s Maximum Expansion bullets using water and Corbin SIM- TEST ballistic medium, and the results are positive but mixed.

Suffice it to say not one of us would volunteer to be shot with this exotic ammunition.

This highly specialized ammo runs about $2 per cartridge, so tests are very welcome. Currently the Maximum Expansion line has offerings in .38 Special, .380 and .45 ACP, 9mm, .40 S&W and even subsonic .300 AAC Blackout.

Maximum Expansion ammunition uses a solid copper bullet that is machined to have a hollow cavity and four petals. As soon as the bullet begins to penetrate, the petals fold out perpendicular to the axis of the bullet out to about 90 degrees. The expansion is nothing short of amazing. 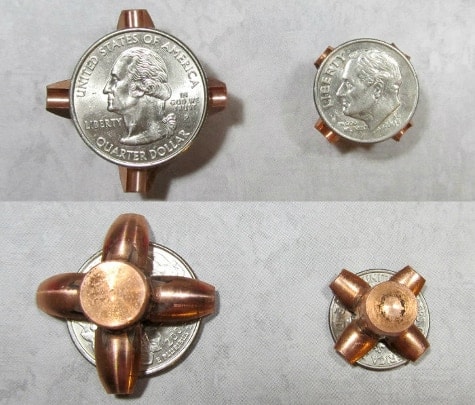 These bullets were fired from a .45 ACP Glock 36 and a converted 9mm Glock 27 and recovered from water. These pistols have short, 3.8-inch and 3.5-inch barrels, respectively, and yet expansion was perfect and complete with all samples. The .45 expanded to about 1.3 inches wide, which is just unheard of. Here is the video of the preliminary water jug test.

Following up on the water test was a more rigorous second session using the SIM-TEST ballistics medium, and expansion was just as impressive, which is to say, complete. The second test used just .45 ACP cartridges, fired from the same Glock 36 and more compact STI Shadow with a 3.25-inch barrel.

But it was this second test that showed one area of under-performance. These bullets only penetrated about seven inches into the SIM-TEST, although they flattened out perfectly and transfered 100% of their energy into the gel brick without any fragmentation. The FBI requires that all ammunition issued for duty penetrate between 12 and 18 inches of gelatin and four layers of denim.

There are two things that could be happening here. First of all is that SIM-TEST is more elastic than actual ballistics gelatin, which combined with the enormous surface area of the expanded bullet, simply stops the bullet faster than traditional gel would. According to Lehigh Defense, these bullets should be able to penetrate around 10 inches of gel. While not on par with FBI requirements, this type of expansion is worth considering even at the expense of a small decrease in penetration.

The other reason might be the increased proportions of the petals of the .45 ACP bullet compared the 9mm bullet. Penetration is directly related to sectional density and velocity alike, and it could be that the .45 simply expands too much. If you thought that was possible. They did not test the 9mm in the SIM-TEST medium and we suspect that with a larger base and smaller petals, that it has better penetration characteristics. 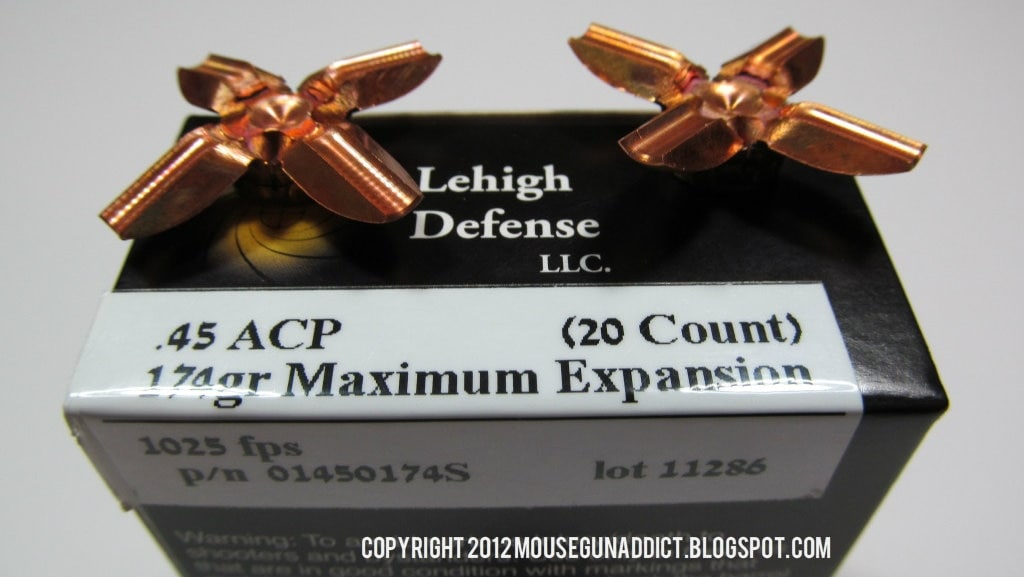 Still, these bullets show promise. In addition to expanding fully through denim from short-barreled handguns, they achieved velocities similar to those written on the side of the box. From a 5-inch barrel, these 174-grain copper bullets are supposed to make 1,025 FPS, and from sub-3-inch barrels, they still managed nearly 1,000. Fired from a 3.8- inch barrel, the ammo made an average 1,008 FPS and a respectable 954 from the shorter 3.25-inch barrel.

Lehigh Defense isn’t the only company that believes machined solid- copper bullets have promise. The Grizzly Cartridge company manufactures similar self-defense ammunition in 9mm, .45 and .380 ACP. It could be that with some tweaking, this sort of design may one day be a standard in the ammunition industry. What would it take for you to change over to this downright avant-garde.

Fortunately, more testing of this stuff is on order, and we’ll fill you in when the Mousegun Addicts plumb these depths.