Ballista Tactical Systems is officially launching their literally revolutionary Nautilus Rotating Rail. This carbine-length tactical quad rail is made of two sections that are capable of rotating 360 degrees in either direction, allowing the shooter to quickly configure their rifle in different ways without having to remove or replace any accessories.

Designed for AR-15 and M4 carbines, the Nautilus is constructed of hardened 6061 T6 aluminum and has an overall length of seven inches. The rails rotate over steel ball bearings for durability and precision. It isn’t a free-floating handguard, it mounts to the delta ring and the handguard cap like a standard AR forend. 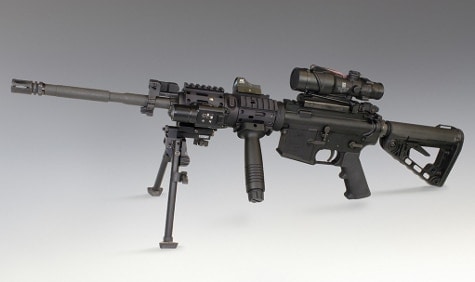 The Nautilus has eight rail sections, each capable of hosting its own accessory. With the push of a you unlock the rails and they rotate in either direction and lock in 45-degree increments, allowing for offset optics and grips. It’s an easy way to install a canted red dot sight as a backup optic for a fixed magnified optic on the upper receiver. The rails rotate in place, and will not upset an optics’ zero.

Like all good tactical rail systems, the Nautilus will be available in four battle-ready colors, flat dark earth, coyote tan, olive drab and naturally matte black. Currently Ballista only offers the Nautilus in black, although that is the purest shade of the tactical rainbow. 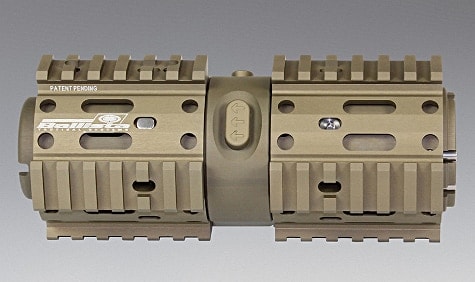 If you’re interested in the Nautilus, you can head over to the Ballista Tactical Systems web store and pick one up for $550. While that may seem steep, it is considerably lower than Ballista’s original estimated price of $795.

The Nautilus Rotating Rail still stands at the center of the podium as the world’s most tactical handguard, and will no doubt continue to reign there for a long time to come. Still, we do thing there are a couple of actual real-world uses for this rail system.

In addition to mounting offset “on-the-fly ambidextrous” optics and sling points it could be used to twist a small bipod to the 3- or 9-o’clock position if you have to shoot lying on one side or the other. And… You can’t have too many flashlights on your carbine? That rotate?

While we can’t come up with a very long list of uses for this handguard, that doesn’t mean they don’t exist. And if you’re just looking for something to convert money into a conversation piece, well, you’ll have a hard time beating the Nautilus Rotating Rail.

Besides, it’s not like Ballista doesn’t have a sense of humor about this project.