On Thursday, gun advocates in Detroit gathered on the sidewalk across from a local church were police were holding a gun buyback event.

Toting signs that read, “Guns Wanted! Cash” and “Cash for guns,” their objective was clear: we’re willing to outbid the police for your unwanted guns.

Where law enforcement was willing to pay gun owners between $25 and $100 for their used guns, the pro-gun crowd was eager to up the ante.

“These guys out here are willing to double and triple that [price],” event organizer Rick Ector, told Mlive.com.

However, most participants in the police program ignored the gun advocates, offering the better prices.  This was most likely due to the fact that a row of five officers stood in the middle of the street, Ector surmised.

“The police are obviously putting a wall, a barricade, between us and the people who are in line,” Ector said. “It’s a form of intimidation.”

Richard Ward, who was selling his grandmother’s 410 bolt-action shotgun to police, considered going across the street to get the better deal, but then got nervous.

“I ain’t going to chance that,” he told Mlive.com.

While the gun advocates were insistent that selling firearms openly, in public, was legal, the police had a different take on the situation. 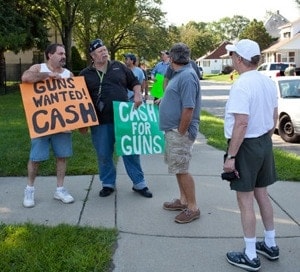 “It’s illegal for them to make a purchase,” Detroit Police Sgt. Eren Stephens told Mlive.com inside. “They have to have a permit to do it. So if they’re caught, they’re going to be in trouble.

“If you’re on a public street, you have to have a permit to do it,” she iterated  (thankfully, no one was arrested for purchasing or selling firearms in the street).

She also touted the merits of the buyback as a “tool” to reduce crime, a notion that Ector soundly rejected.

“There’s a lot of reasons (gun buybacks) are flat out wrong. For one, it’s not going to change anything with regards to violent crime in the city of Detroit; two, potentially you have criminals who are destroying evidence along with the Detroit Police Department.”

On top of that, Ector also believes that buyback programs send the wrong message to the public.

“Guns are not evil, despite what the government and police are saying,” Ector said “Guns do not cause crime; bad people cause crime.

He added that given recent reductions to municipal budgets that effect law enforcement, it’s more important now than ever before that the public see guns as a tool for self-defense and not as harbinger of illicit drugs and crime.

“There have been numerous cuts to public safety resources,” he said. “It is extremely dangerous to be in the city of Detroit and for them to demonize the handgun, it really sends the wrong message.”

With self-defense killings in Detroit at 2,200 percent above the national average, Mr. Ector makes an excellent point.