The proprietors of Ammo Depot in Rancho Cordova, CA, are paying sponsors of a local high school football team.

As such, the school proudly displayed an Ammo Depot sign on the team’s stadium scoreboard – that was until district administrators stepped a few weeks ago and told the school that the sign had to be removed or concealed.

District officials did not elaborate much on why they decided to breach the contract the Ponderosa High School booster committee made with the ammo supply store, except to say that it was inappropriate. 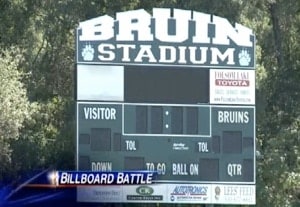 “When the school district saw the sign and recognized that it was not an appropriate advertisement in a public school setting, we asked the school to take that down,” El Dorado Union High School District Associate Superintendent Baldev Johal told the Sacromento Bee.

The two brothers who run the store, Aaron and Brandon Lungren, were shocked by the district’s decision, particularly because both had attended Ponderosa High School.

“We were born and raised in this area, and it’s very near and dear to us,” Brandon Lungren told the Bee.

He added that the store has supported football programs in the past at other schools, all without issue.

Left with few options, the Lungren brothers decided to lawyer-up and pursue a breach-of-contract lawsuit against the district.  Attorney Kevin Marchese, who is representing Ammo Depot, certainly believes the brothers have a case.

“Any time that somebody pays for advertising and the party that is paid the money obliterates or defaces the advertising, I think that’s problematic, and that kind of conduct invites legal recourse,” Marchese told the Bee.

Currently, the brothers are engaged in negotiations with administrators in the hope that an amenable resolution can be reached.

According to a press release, they’ve even offered to “revise the design of the sign to focus on Ammo Depot’s personal protection and firearms training courses, which promote individuals learning how to protect themselves and their families resulting in a safer community.”

Additionally, Aaron Lungren described how shooting sports are embedded into the local culture, pointing out that several high schools have skeet and trap teams and that an advertisement for an ammo store should not be viewed in such a biased manner.

“This is a good, wholesome recreational activity. It’s a legitimate sport. It is embraced by the international community. Our school administrators shouldn’t be so narrow-minded,” he told the Bee.

“We just want them to put the sign back up and acknowledge that a mistake was made,” he added.

You can (and should, if you have a free moment) voice your support for Ammo Depot’s right to advertise by contacting the following individuals

Also, here are some more facts about the case from the Ammo Depot press release:

• Ammo Depot, per school and district policies, established and paid for a contract for advertising on the Ponderosa High School Football Field Scoreboard. The school’s official booster, “The Bruin Den,” approved the signage and had it made and installed.

• Ammo Depot was notified that the school had made a unilateral decision to remove the sign, even though the advertising was not violating any school or district policies.

• Ammo Depot met with school officials regarding the matter only to learn that a few school administrators had personal bias against the advertiser’s industry, with no regard for Ammo Depot’s service to our community. School Officials have avoided providing any meaningful response or explanation of their unilateral actions to the advertiser and their own school-connected booster organization.

• Ammo Depot has offered to revise the design of the sign to focus on Ammo Depot’s personal protection and firearms training courses, which promote individuals learning how to protect themselves and their families resulting in a safer community.

• Ammo Depot’s typical customer consists of families who enjoy the sport of shooting together. As such, Ammo Depot considers it crucial to advertise at wholesome All-American family venues such as football games.

• On Friday, August 17th school officials, in defiance of school and district policies, covered Ammo Depot’s advertising on the scoreboard. The school has turned the sign /advertising around, giving the impression that the advertisement/sponsor is in distress or that there is something wrong, when, in fact, the Ammo Depot’s sign was both approved and paid for before it was displayed on the scoreboard. By turning the sign around or covering it up, not only is advertising deprived, but it becomes a point of negative advertising – a condemnation by the school purely because a few administrators dislike shooting sports.