The No Stock Needed chin stock is a firearm accessory that allows AR-15 users to achieve a 3-point grip on their AR pistols using, yes, their chins. This is an authentic product, and the company, Halix, is accepting genuine currency for pre-orders of the NSN.

This real product that will be shipping soon has stirred up quite a bit of debate. Many have already taken a position, whether they think this is a ridiculous idea or accident waiting to happen, that this adapter may have some novelty appeal or actual real-world usability or joined the third group of people just pointing and laughing.

The NSN isn’t a buttstock in the literal or legal sense. It is a heavily re-imagined buffer tube end plate with a pair of wings mounted perpendicular to the bore. Each wing has a foam rubber pad on it right where you hold it up against your chin. Really.

The idea behind the NSN is largely to allow people to find a middle ground between AR pistol and short-barreled rifle (SBR). Short-barreled rifles are restricted by the National Firearms Act and require special registration with the ATF in addition to a $200 tax stamp to transfer it to yourself. This allows you to have your pistol and chinweld, too. The ATF has so far signed off on the NSN, stating that in order for it to be a stock it must be designed to be shouldered. So therefor, all firearms using the NSN are pistols—meaning you cannot attach a forward pistol grip to this without registering it as an Any Other Weapon (AOW) with the ATF first.

There are two strong arguments against the NSN. First is safety. Chins aren’t generally used this way. ARs chambered in .223 Remington don’t have the most stout recoil but that doesn’t mean that prolonged use or higher calibers can’t cause injuries such as temporomandibular joint disorder, or injuries to your reputation such as being seen using an NSN. 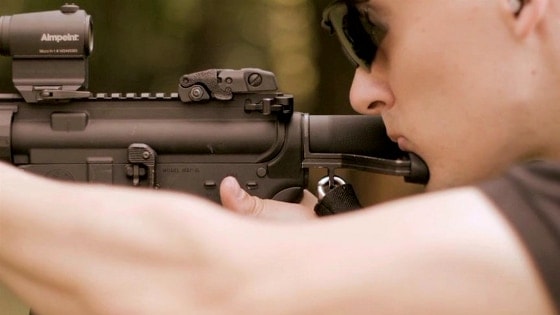 Others have criticized it from a more practical perspective. Legal and safety hurdles aside, this looks like an incredibly awkward way to handle a gun. Not as bad as holding a shotgun like a pistol, but getting up there.

Still, there will be a few people who will be able to use this, perhaps even use it well. We hope so because as a stepping stone to building an SBR it doesn’t offer much of a foothold. The NSN has a pre-order price of $250, making this more expensive than a tax stamp for a short-barreled rifle—but it also doesn’t come with the six-month waiting period.

Production of the first wave of No Stocks Needed is expected to yield finished NSNs ready to ship by December 1st, however, Halix has stated that if demand for the NSN remains as high as it currently is they may be able to arrange for expedited tooling and deliver sooner.

While it’s still up in the air whether or not the NSN is a good idea, it’s safe to say it is a truly unique idea. Maybe it will see a future with German troops.

Should you decide to give this a go, let us know what you think of it. But please, please use this with a mouthguard.