As Guns.com reported last week, violence is skyrocketing in the Windy City.  In fact, it’s gotten so bad, that last week Chicago Mayor Rahm Emanuel asked the federal government to send in U.S. Marshals to help stem the rising tide of bloodshed.

So, the question must be asked, why is the city sending 50 police officers to Charlotte to work security detail at the Democratic National Convention? 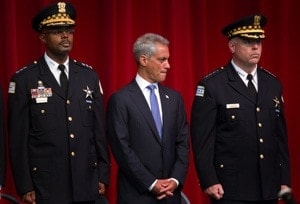 Seriously, if the city is in a state of crisis, which many believe that it is, why has Mayor Rahm Emanuel opted to divert precious resources to a political rally?

Well, ABC News, which broke this story, spoke with Chicago Police Department spokeswoman Melissa Stratton who explained that the police officers were off duty and part of an exchange program between Chicago and Charlotte.

“These are officers on their days off and were specially trained as mobile field force officers for the recent NATO summit in Chicago,” Stratton told ABC News.

Evidently, Charlotte had sent officers to help work that recent NATO summit and Chicago was returning the favor by sending police men and women to work the DNC.

“They are there on their days off and were not pulled off the street,” Stratton iterated, adding that the officers are being paid through a special federal grant of $50 million for convention security.

“No funds from the city of Chicago are involved,” she said.

However, a police union official questioned the decision, implying that it lacks common sense.

“We had two homicides and dozens of shootings this weekend, and we’re sending offices out of the city?” Pat Camden, a spokesperson for the Chicago Fraternal Order of Police, told ABC News. “I think the average person would shake his head over that.” 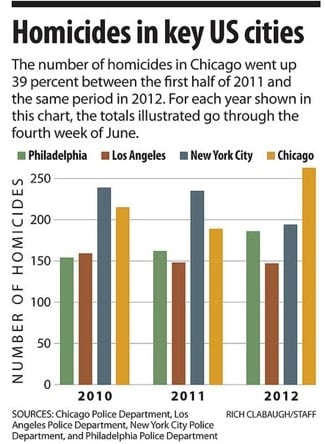 As of Aug. 19 Chicago has reported 346 killings, according to CPD statistics.

Community leaders were also wondering what Mayor Emanuel was thinking.

“I would love to know the logic behind that decision to send them there given all that is happening here in Chicago,” Rev. Ira Acree of the Greater St. John Bible Church in Chicago told ABC News.

“We’ve had a collective failure of all institutions to address the violence and I don’t give the President a pass either,” added the Chicago preacher.

According to the Chicago-Tribune, when Mayor Emanuel ran for office he promised to put 1,000 more police officers on the street.  However, there was a catch to that promise.  It didn’t mean hiring new officers, it means reassigning officers from other duties to work patrol assignments.

But Emanuel’s strategy of rotating more officers to beat patrol hasn’t worked.  One reason for its lack of success is that the Chicago’s police force has been stretched thin.

“We’ve had about a thousand officers retire over the last two years and only about 200 have been hired to replace them,” Camden told ABC News.

Yet, neither Mayor Emanuel nor Police Superintendent Garry McCarthy is inclined to acknowledge the reduction in force and the potential effect it has had on crime.

“Gang enforcement officers, gang (intelligence) officers and the narcotics teams are all going to be applying resources to those locations [high crime locations] while not losing track of the other locations,” McCarthy said. “It’s not a shell game.”

McCarthy’s logic is troubling.  If the expectation that officers have to cover two places at once is not considered a shell game, then, what is it?

I suppose the answer to that question is: Chicago politics.