While it looks like a prop for a steampunk costume, this is actually a very rare and early tactical handgun. A modified Luger pistol, this “Night Pistol” was issued to officers of the Hitler Guard, the men who patrolled Adolf Hitler’s bunker.

What made the Night Pistol so unique was that it was retrofitted with a machined, barrel-mounted anodized brass flashlight. In the ’40s. And even though the tactical gun-mounted flashlight is something that’s downright mundane today, the Night Pistol still has a few tricks up its sleeve. 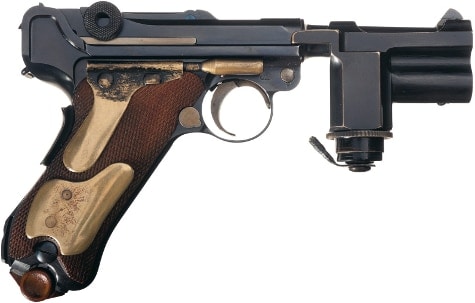 Behind the flashlight housing is the battery, which is wired to the right grip panel. Recessed into the checkered walnut grips are two brass plates that, when in contact with skin, which is slightly conductive, toggle the light on. The Night Pistol’s tactical light only comes on when handled.

The flashlight was designed to clip on and off easily for storage. The holsters issued with the Night Pistol don’t accommodate the light while it’s installed, so it stands to reason they were carried separately. The holster also has a wide cutout around the grip to facilitate quick draws. 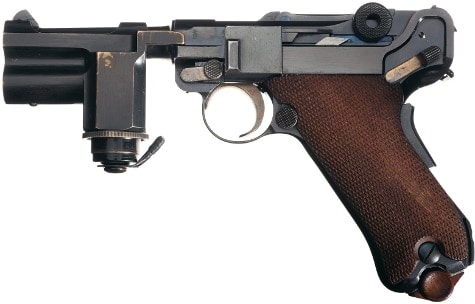 Even without the modifications and the light, the Night Pistol is an uncommon configuration. It is based on early Luger designs, with a 4-inch barrel, chambered in 7.65x21mm Parabellum and featuring a grip safety. It also was issued with magazines with matching walnut wooden floorplates.

If you happen to come across a Night Pistol, do pick it up, because only two are known to exist. One recently sold at the Rock Island Auction house for $184,000 and the other lives in a military museum in Germany.

So this isn’t a P08 that’s been cobbled together for a movie by a die-hard Jules Verne fan, it’s rather a nearly-priceless piece of World War II history machined from brass and deep blued steel. It’s also a design that’s years ahead of it’s time.

While it’s likely that modern tactical lights by the likes of Crimson Trace and Viridian no doubt run brighter and last longer, we do have to give this one points for originality.