The Polish military is proposing to roll out an updated general-purpose machine gun (GPMG) next year, the UKM-2013. This nearly coincides with the upcoming military-wide adoption of the MSBS-5,56 infantry rifle, and demonstrates Poland’s commitment to further modernizing their armed forces.

The UKM-2013—currently being showcased at the 2012 MSPO (translates in English to “International Defence Industry Exhibition”)—is based on Poland’s UKM-2000, which was introduced not surprisingly in the year 2000, the year after Poland joined NATO. The machine gun was one of many changes to Poland’s Warsaw Pact-era equipment and tactics by adopting U.S.-style support GPMGs chambered in 7.62 NATO and discarding their RPKs chambered in 7.62x39mm. 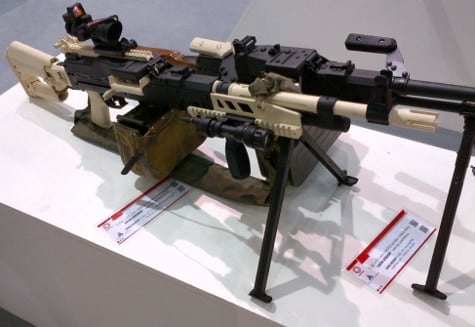 The changes shed lingering signs of the GPMG’s COMBLOC origins and include new polymer furniture, a tri-rail handguard and redesigned top cover rail with an integrated aperture sight, and a clever side-folding buttstock that is telescopic and has an adjustable cheek riser. The buttstock also has a built-in foot that can be lowered and used as a monopod or raised and used as a grip. It literally has a shoulder thing that goes up.

The Firearm Blog got photos and details of this new machine gun. The UKM-2013 will also be available with fluted barrels in two different lengths, 21.5 and 17 inches. Gone is the long, SVD-style birdcage flash hider, and in its place is a stout pronged flash hider. And it will feed from 100-round soft bags instead of steel ammo cases. The UKM-2013 will continue to be chambered in 7.62 NATO and fed by M13-linked belts. 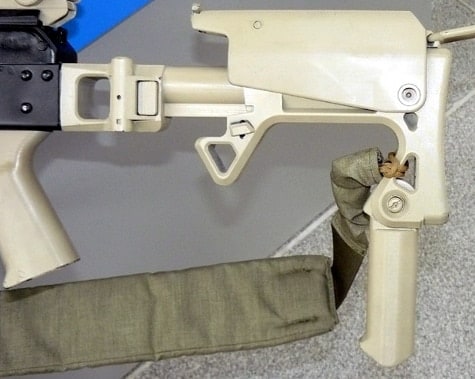 Like the UKM-2000, the UKM-2013 is loosely based on Mikhail Kalashnikov’s PK machine gun. While it has many changes to the PK pattern it operates using the same mechanical principles that have absolutely proven to be fieldworthy.

After the fall of the Soviet Union, the Polish military quickly adopted Western standards and began updating their armed forces with NATO standards-compliant equipment almost immediately, starting by re-chambering their Russian PKM machine guns in 7.62 NATO, but continued to use Soviet links. This was a compromise that held out until the Polish WAT—Wojskowej Akademii Technicznej, Poland’s Military University of Technology—developed the UKM-2000 which uses standard M13 disintegrating links.

Changing the feeding mechanism required a massive redesign of the PKM. Although some parts are compatible, like the fire control group, top cover, bipods and other mounts, the UKM has a completely different bolt, bolt carrier, receiver and even chamber position. It weighs slightly more than the PKM, at 18.5 pounds versus 16.5, but is still lightweight compared to many other GPMGs. To compare, the U.S. M240 weighs 27.6 pounds, and the M240L, the lightest-weight configuration, 22.3. 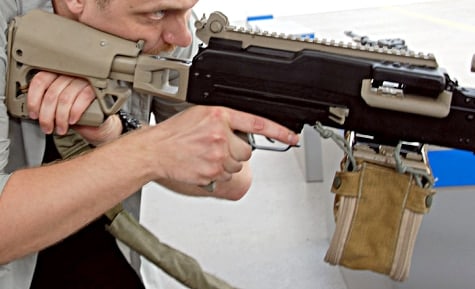 It’s no surprise that Poland is choosing to keep the UKM. It is one of the most reliable GPMGs ever made, with military tests encountering just 48 stoppages throughout a 25,000-round torture test—nine of which were ammunition-related—giving this machine gun a 0.15 percent malfunction rate. Modernizing it with military standards like Picatinny rails, polymer furniture and peep sights—the 2000 model uses AK-style tangent sights—is welcome.

Now the question is, when are they going to make a semi-auto version already?