Whenever the Secret Service makes headlines, it’s typically not good news for the federal law enforcement agency charged with protecting current and former national leaders.  This latest story is no exception.

Last week one of Mitt Romney’s Secret Service agents left her loaded handgun in the bathroom of the Republican presidential candidate’s charter plane during a flight from Tampa to Indianapolis.

A CBS News producer found the gun in the lavatory and immediately notified a flight attendant, who promptly told a Secret Service agent, who went into the bathroom and retrieved the gun.

The gun was left in the bathroom located at the rear of the plane where the press sits and congregates.  Romney and his handlers sit up front and use the forward facilities.

By all accounts it was a mistake by the agent and Romney was never in any danger.

Ed Donovan, a spokesman for the United States Secret Service, told ABC News that officials are “aware of the incident.” 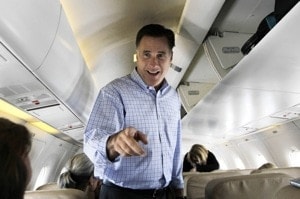 “We take the care and custody of our equipment — especially firearms — very seriously,” he said. “We will deal with this matter internally and in an appropriate manner.”

When the plane landed the agent was removed from Romney’s security detail.  She never re-boarded the plane, which headed back to Tampa for the remainder of the GOP convention.  No details have been released about the agent.

Romney’s aides were made aware of the agent’s lapse in judgment, but deflected all inquires to the Secret Service.

The GOP candidate has been under the protection of the Secret Service since late January.  His wife Ann had Secret Service agents assigned to her on Aug. 26, just two days before her husband secured the Republican presidential nomination, as Huffpo reported.

It’ll be interesting to see what, if anything, happens to the agent.  One would assume she’ll be reprimanded to some extent and will remain off of Romney’s security detail indefinitely, but will she lose her job?  Should she lose her job? Or is it a classic case of no harm, no foul?

Also, have you ever left a loaded gun in a compromising place?  If so, where?  And how did it play out?