This week it’s the Democrats turn to tell us how they plan to save America as well as where they stand on the issues.

With respect to guns and gun ownership, here’s what the Democrats had to say in their 2012 party platform:

We recognize that the individual right to bear arms is an important part of the American tradition, and we will preserve Americans’ Second Amendment right to own and use firearms. We believe that the right to own firearms is subject to reasonable regulation. We understand the terrible consequences of gun violence; it serves as a reminder that life is fragile, and our time here is limited and precious. We believe in an honest, open national conversation about firearms. We can focus on effective enforcement of existing laws, especially strengthening our background check system, and we can work together to enact commonsense improvements – like reinstating the assault weapons ban and closing the gun show loophole – so that guns do not fall into the hands of those irresponsible, law-breaking few.

Essentially, it’s a call for more gun control, which should come as no surprise as most Democrats seem to believe in this oxymoronic notion of ‘commonsense’ gun control.  As most of us realize, nearly all forms of gun control are ineffective and defy reason or what one might call ‘commonsense.’ 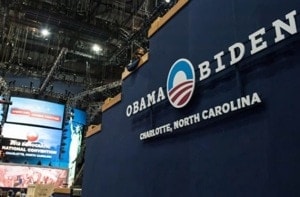 That said, there’s something else that I picked up on in this little statement and I don’t know what to make of it – so I’ll ask you.  It’s a semantics question really, but it may have some larger significance about the DNC’s willingness to distort the language of the Second Amendment (or I may just be paranoid and reading too deeply into things).

Anyways, notice how in the first sentence the DNC fails to correctly reproduce the pivotal aspect of the 2nd Amendment or what Justice Antonin Scalia would describe as the operative clause, “the right of the people to keep and bear arms…”

The DNC uses the word “bear” but not the phrase “keep and bear” and then the author(s) of the statement seemingly deliberately mangles the phrase so that it reads, “we will preserve Americans’ Second Amendment right to own and use firearms.”

“Use” in this context has a narrower meaning, I believe.  I think it implies something to the extent of one has the right to use a firearm for hunting deer, but one does not have the right to bear (or carry) a firearm for self-defense.  Does that make sense?

Perhaps the point I’m attempting to make can be better understood by examining how the GOP described its stance on the Second Amendment:

We uphold the right of individuals to keep and bear arms, a right which antedated the Constitution and was solemnly confirmed by the Second Amendment. We acknowledge, support, and defend the law-abiding citizens’ God-given right of self-defense.

See the difference?  The GOP’s position is crystal clear.  The right is not just to own and use firearms, but to keep and bear them for self-defense.  This critical aspect of the Second Amendment is completely omitted from the DNC’s platform plank.

As such, it leaves me to speculate about (a) the use of language – was the “own and use” phrasing a conscious effort to redefine the Second Amendment as a limited right and (b) do Democrats, overall, believe that one has the right to keep and bear arms for self-defense?