The M855 “Green Tip” bullet has not been a popular projectile with just about everyone who’s come to depend on it. As an all-purpose round it set out to do a little of everything, but never really succeeded at anything. Accuracy, stopping power and barrier penetration problem reports have been pouring in from all over.

In 2010 the Army announced a replacement, the M855A1 “Brown Tip” Enhanced Performance Round (EPR), after delays to its development caused by poor ballistic performance when used in high-temperature environments. The round was also developed to be “green” and lead-free. This immediately raised suspicions that the Army was giving in to health and environmental concerns at the cost of cartridge performance.

Basically, the Green Tip was crap, and people assumed enhanced crap would remain crap. But after this year’s NRA National High Power Rifle Championship at Camp Perry and months of testing in the field, it would seem like it is possible to put a polish on the M855.

Since 1907, every year at the Camp Perry National Guard training center the Civilian Marksmanship Program and the NRA host the National Shooting Matches. These competitions are open to the public and competitors come from all over and include both military and civilian shooters. This year the Army loaded one shooter, Rob Harbison—one of the developers of the M855A1 EPR and regular competitor at the High Power Championships—with the new cartridge.

The Army reports, “Throughout the competition, Harbison had several noteworthy performances, including firing a perfect 200 points in the Coast Guard Trophy Match, which is 20 shots fired from the sitting position at 200 yards. He also finished 17th overall in that match (of 385 competitors), finishing in the top five percent. Also of note Harbison scored a perfect 100 on the final string of ten shots during the Air Force Cup Trophy Match, fired at 600 yards from the prone position. That is 10 shots in a row within the 12-inch, 10-point ring at 600 yards with combat ammunition.”

“Using the Army’s newest general purpose ammo was not a hindrance in this competition,” Harbison said. “When I did my part, the M855A1 was right on target all week. I don’t think I could have scored any higher if I was using match grade competition ammunition.” 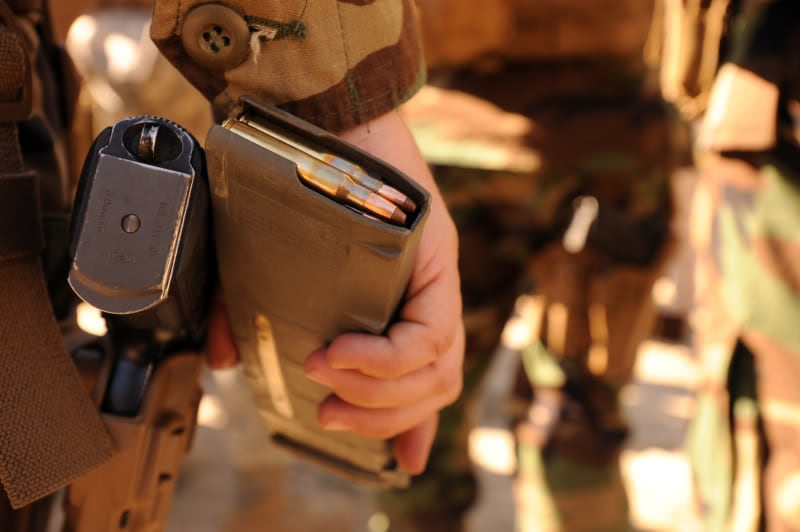 But what is more important than how this new cartridge performs at a national-level shooting match is how it performs on the field. One of the first units to be issued the M855A1 is the 1st Brigade 101st Airborne Division. Chief Warrant Officer (CW2) Daigle of the 101st ABN had the following comments to say about the new cartridge:

The M855A1 EPR may be green, and reports are still pretty thin, but it very well could be the ammo the Army was asking for all along. It is more effective all around, with improved penetration through Kevlar, mild steel, concrete, and vehicle components like doors and auto glass and even helicopters bodies, to name a few, and better accuracy, higher velocities, less wind sensitivity and more precision complementing its superior terminal results.

The bullet is completely different. It has an exposed, bronzed (for corrosion resistance) steel tip backed by a solid copper plug. The steel tip is larger and sharper than the M855 bullet, and it’s serrated like an arrowhead. The bullet still weighs 62 grains, so it’s longer without the lead and has a better ballistics coefficient. It’s also reverse-jacketed—all changes that make it more accurate and stable in-flight.

The ammo has many other changes other than being a differently-made bullet. It uses a hotter propellant, operating at the ragged edge of NATO EPVAT 5.56 service proof pressures, and a modified four-pronged primer anvil for more reliable ignition. Combined with the better projectile ballistics, this cartridge has a significantly improved effective range over the M855, particularly when it comes to effective penetration. The M855 can penetrate 3/8-inch mild steel plates out to 160 meters. The M855A1 EPR can do it at 350, and that’s with an M4 with a 14.5-inch barrel.

There are three criticisms against the EPR of note. First is that it is not really up to the task at penetrating ceramic plate armor. Neither was M855, and the Army does have M995 armor-piercing ammo for that exact reason. The second is that at the velocities and pressures the enhanced round is operating at, it will wear out barrels quickly. And finally, it costs more than lead. It’s not a particularly expensive cartridge, but the M855 is cheaper to manufacture.

But if the M855A1 EPR continues to prove to be this accurate, effective and all-around capable, then these small compromises pale in comparison to the advantage it give our soldiers.

Are you among the few that have first-hand experience with this new 5.56 cartridge? What are your opinions about it?