Ruger has just released a new all-steel single-action revolver, the Single Nine. It takes their unflappable Single Six frame and chambers it with nine rounds of .22 Winchester Magnum Rimfire (WMR). Like other recent Ruger products, this is a “hard launch” with guns already in the pipe for distribution. Expect to see these on shelves soon if not now.

This is a welcomed addition to Ruger’s Single Six lineup, which also includes the Single Ten .22 Long Rifle revolver. When the Single Ten was announced last year, people were quick to ask for a similar high-capacity version in .22 WMR. 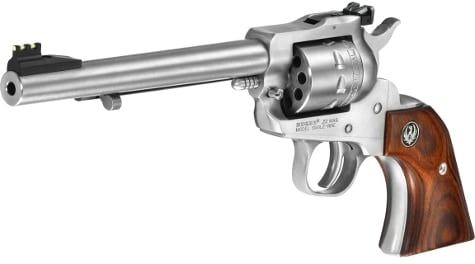 The Single Nine fits the bill perfectly. It’s likely that the reduced 9-round cylinder is for thicker chamber walls necessary when dealing with the higher-pressure cartridge. It also has a lengthened barrel to take advantage of the cartridge’s greater propellant charge, up to 6.5 inches from 5.5. Like the Single Ten the Nine has a satin stainless steel finish and smooth hardwood “Gunfighter” grips.

The Single Nine is designed as a target shooter out of the box, building on Ruger’s already light single-action trigger with practically no overtravel with the addition of windage- and elevation-adjustable Williams fiber-optic Fire Sights. Whether you’re looking for a plinker or varminter, this revolver is built to shine when it comes to precision shooting.

And recoil isn’t going to be a problem with this 39-ounce revolver. The 6.5-inch barrel has a 1-in-14-inch twist and the revolver has an overall length of 12 inches. The Single Nine doesn’t command a price premium over the Single Ten, and has an MSRP of $630. The Single Ten regularly sells for around $450 and we don’t expect the Single Nine to be priced any differently.

If you can’t decide between .22 Long Rifle and .22 Magnum, Ruger does produce the Single Six Convertible revolver, which is chambered in .22 LR but includes a .22 WMR cylinder, in both deep blue and stainless steel finishes in a variety of barrel styles and lengths, with your choice of hard rubber or hardwood grips. Capacity with the Convertible is fixed at six, which is where the Single Nine shines.

Once again, people asked for it, and Ruger delivered. As .22 WMR grows in popularity, so has Ruger’s offerings chambered for it. And the Single Nine is priced right for a single-action revolver that you know will last forever.