The demand for firearms shows no sign of slowing down a firearms industry report indicated along with revenue reports and projections from gun manufacturer Smith & Wesson.

According to a recent report by the National Shooting Sports Foundation, background checks increased almost 30 percent in the month of August when compared to numbers from the previous year.

This marks the 27th straight month that NSSF-adjusted NICS figures have increased when compared to the same period the previous year and the highest figures ever reported for the month of August.

The adjusted NICS data were derived by subtracting out NICS purpose code permit checks used by several states such as Kentucky, Iowa and Michigan for CCW permit application checks as well as checks on active CCW permit databases.

As the NSSF pointed out, background checks do not translate directly into firearm sales, but they are a reliable way to gauge market conditions.

In turning to the actual market itself, Smith & Wesson Holding Corp announced that it was boosting production capacity to meet the public demand for quality firearms.

The Massachusetts-based gun manufacturer has had a stellar year, with shares doubling over the past 12 months. 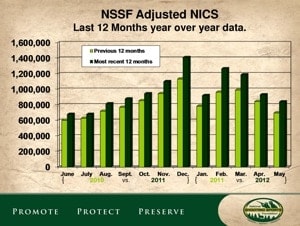 What does the mean in terms of dollars and cents?  Well, in its third quarter alone, the company earned 28 cents per share on revenue of $136 million, which surpassed predictions of a profit of 18 cents per share.

In looking ahead to the holiday season and beyond, executives expect consumer demand to remain on the up and up.

“As we come into Christmas … there is a lot of consumer purchase activity,” Chief Executive James Debney told analysts from Reuters on a conference call. “We want to be in the forefront of the consumer’s mind.”

Currently, the fourth-quarter forecast has sales growing 40 percent, coming in somewhere between $130 million and $135 million when it was initially thought that sales would average around $119 million, according to Reuters.

As for fiscal 2013, the outlook is also better than what was previously expected.  Company execs are now looking at numbers between $530 million and $540 million as opposed to the earlier figures of $485 million and $505 million.

Overall, the NSSF background check numbers along with the success of Smith & Wesson (as well as other gun makers) augurs well for an industry that has to constantly fend off attacks from organizations, politicians and media outlets that try to demonize its products.

If it’s true that people vote with their wallets, then it’s pretty clear where the public stands with respect to firearms.   Hopefully, whoever wins in November is paying close attention to these numbers.