The Quirky Physics of Guns in Space (VIDEO)

Honk honk! Get on the bus everybody, because we’re about to take you to school.

No! Don’t hit the back button just yet! This may be a lesson in physics, but we promise that it should pique the interests of a lot of gun owners out there. YouTube users Vsauce and MinutePhysics teamed up to talk about the physics of guns and bullets, with a few minutes about sun and earth physics thrown in there as well.

The video covers two different components of gun physics. The first involves orbital velocity and how much firepower it would take to put a bullet into orbit (around the 1:00 mark). Putting a bullet into orbit around Earth is no easy task, but the wonders of mathematics means that high-powered artillery weapons should be strong enough to put a projectile into orbit around the moon. All we need is a gun that shoots at a velocity of about 1600 meters per second, like World War I Germany’s Paris Gun.

“But wait,” some of you are probably saying. You can’t fire a gun in space, because guns work on combustion and there’s no air in space. Are any of our readers fans of the old space-western television series “Firefly?” In one of the episodes, no-nonsense mercenary Jayne Cobb has to shoot his gun at an enemy vessel. In order to get around that whole no oxygen problem Jayne put the gun inside of a spacesuit, filled it with air, and then fired it from within the suit. 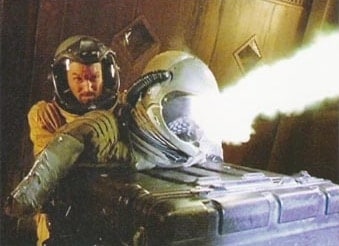 Eh, not quite. You could shoot a gun out of a space suit if you really wanted to, but that wouldn’t be necessary. This is an example of Hollywood physics not really syncing up with actual physics, kind of like those noisy explosions in a Star Wars movie (no air means no sound). In reality, guns carry their own oxidizer so that they don’t need air from the atmosphere in order to combust.

Part two of outer space gun physics (we hope you’ve been taking notes – we’re going to quiz you on this later) is all about shooting stars. No, not those things that grant wishes, we mean aiming your gun at a distant star and pulling the trigger — literally shooting at stars. Most of us are familiar with physics enough to know that an object traveling through space will continue to travel forever unless it collides with something or gets snagged by a gravity well. So, if an astronaut takes an AR-15 up into space, aims it at a distant star and then pulls the trigger, will the bullet eventually hit the star?

The video explains that the bullet will forever be alone because stars are traveling away from us faster than bullets can travel. Kind of demoralizing, isn’t it? The longer we wait to achieve interstellar technology, the harder it will be to catch up with these accelerating stars. That means that if we ever plan on sending an astronaut to a nearby star (not likely — the nearest star is billions of miles away) that means that we’d have to send an astronaut hurtling through space at speeds that would make bullets seem sluggish by comparison.

These aren’t the only examples of crazy gun physics. You can also check out the vortex air cannon and the phenomenon of spinning ice bullets. We all know that guns are fun, but who knew that could be so educational?