As part of a one-year trial run, the Department of Justice has granted the Bureau of Alcohol, Tobacco, Firearms and Explosives the power to “to seize and administratively forfeit property allegedly involved in controlled substance offenses,” which is almost tantamount to saying that on the mere suspicion that one is doing something illegal, the ATF can snatch one’s firearms and property.

The Washington Times, among other publications, have explained the implications of this new DoJ decree:

It’s a dangerous extension of the civil-forfeiture doctrine, a surreal legal fiction in which the seized property — not a person — is put on trial. This allows prosecutors to dispense with pesky constitutional rights, which conveniently don’t apply to inanimate objects. In this looking-glass world, the owner is effectively guilty until proved innocent and has the burden of proving otherwise. Anyone falsely accused will never see his property again unless he succeeds in an expensive uphill legal battle.

Such seizures are common in drug cases, which sometimes can ensnare people who have done nothing wrong. James Lieto found out about civil forfeiture the hard way when the FBI seized $392,000 from his business because the money was being carried by an armored-car firm he had hired that had fallen under a federal investigation. As the Wall Street Journal reported, Mr. Lieto was never accused of any crime, yet he spent thousands in legal fees to get his money back.

Until this expansion of power was granted, the ATF had to refer such matters to the Drug Enforcement Administration (DEA), which would “initiate, process and conclude all necessary forfeiture actions for the controlled-substance-related property.”

So, in other words, now we have at least two federal agencies that can, on a regular basis, seemingly supplant due process and the fourth amendment to take one’s property.

With respect to one’s money, the burden of proof required is even more tenuously worded.  That is, as The Firearm Blog, and The Truth About Guns reported, the ATF doesn’t even need to find drugs; rather it can snatch one’s cash “on theories that the currency was furnished, or intended to be furnished, in exchange for a controlled substance.”

Obviously, there are a lot of questions.  Among them, how can the government do this without Congressional approval or oversight?  Well, Executive Order: 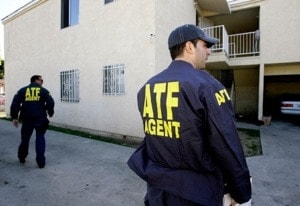 The point to be made here is that it was conceived under the same power that the Obama Administration used to institute the mandate that requires dealers in border-states (Texas, Arizona, California, and New Mexico) to track and report individuals who purchase more than one semi-automatic rifle, with detachable magazine greater than .22 caliber, within a five day period.

Now, with every new change in policy, there’s always the question of how will it effect the average citizen?

This is obviously a difficult question to answer.  The government would probably argue that it’s a necessary measure to help crackdown on drug trafficking and that it won’t infringe on the rights of the law-abiding.

But then, on the other hand, you have organizations like the Drug Policy Foundation, which is dedicated to the legalization of controlled substances that said in a report circa 2000, “one recent study showed that more than 80 percent of person [sic] who had their property seized by the federal government were never even charged with a crime”.

Also, along those lines, the editors at the Washington Times see it as a confiscatory measure specifically designed to take guns and money from the law-abiding.

Law enforcement agencies love civil forfeiture because it’s extremely lucrative. The Department of Justice’s Assets Forfeiture Fund had $2.8 billion in booty in 2011, according to a January audit. Seizing guns from purported criminals is nothing new; Justice destroyed or kept 11,355 guns last year, returning just 396 to innocent owners. The new ATF rule undoubtedly is designed to ramp up the gun-grabbing because, as the rule justification claims, “The nexus between drug trafficking and firearm violence is well established.”

Like with everything, the truth is probably somewhere in the middle between an innocuous measure to help federal agencies fight drug-related violence and crime and a full-blown affront to law-abiding citizens, which in this particular case is not at all comforting.

As it’s been said in the past:

“Any society that would give up a little liberty to gain a little security will deserve neither and lose both.”  – Benjamin Franklin

(Photo Credit: The Truth About Guns)