There are a few different ways to make a popular video series. The classic way is to hire a big-name director, throw money at some pretty actors, and write out an incredible script. But why bother when you can just film stuff getting blown up?

That’s the premise behind the new Yahoo! web series, Kaboom. It doesn’t try to teach you anything about the explosions, like Mythbusters, and it doesn’t care about guest appearances or a storyline. It just follows the simple equation of stuff + guns/explosives = fun.

The show features former Miss USA winner Tara Conner as “the Bombshell” and moustache-twirling explosives expert Rene Diamante as “the Pyrotech” who does all the hard work. At least, we think he’s there to do all the work. We only ever see him talking about the explosives and never setting them up, so his only job might just be to look badass with his muscles, tattoos and bandana. This way we know that the series is Xtreme. 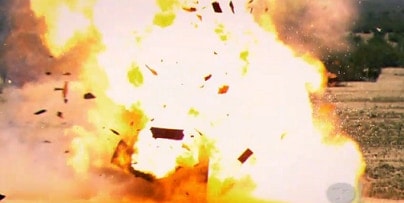 It’s an interesting show, but we’re a little bit torn. On the one hand, blowing stuff up is always fun. We’re not trying to sound too much like 13-year-old boys (“Wooo! Explosions are awesome!”) but what can we say? Explosions are always entertaining.

On the other hand, though, we feel like the series is missing something. It’s got a pretty girl, explosions, slow-motion clips of the pair walking away from fireballs, guns, rock music, and an adorable stuffed monkey mascot. Shake well and film the results. How could it go wrong?

We think part of it has to do with the fact that you have to endure a 15-30 second commercial in order to watch a 2:30 minute clip, just for the see 10 seconds of explosions. All that build-up for such a short climax makes us feel like the show is mostly padding. Multiply that by about 10 different clips and you’ve got a lot of filler to sit through.

And on top of that, why bother blowing up both a vending machine and an ATM? How different can the two be?

As a case study, let’s take a look at the shaving cream episode (which is also the only episode that includes a weapon, in this case a pellet gun, instead of a bomb). Southern belle Tara Conner takes her air rifle (they really want you to know that she’s Southern – she mentions it three times in two minutes) and punches a whole into a can of shaving cream.

We’ll admit: the explosion is neat. It also has the benefit of being harmless enough that you could probably safely try it at home. But for someone who claims “You know I’m from the South, I know how to shoot,” you think she’d know that you have to take the bikini caps off of the scope before trying to use it. But what do we know? Maybe blind shooting is all the rage over in Kentucky.