Inauspiciously launched after the Virginia Tech shootings in 2007 (when a sizable portion of the country was hypersensitive to anything with the word “gun” in it) and forged at a time when the magazine industry was foundering in the midst of a bad recession (the 2008 stock market crash), this southern lifestyle and gun-friendly publication managed to survive when many others did not. 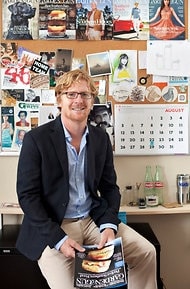 It wasn’t easy though, as editor in chief, David DiBenedetto told the New York Times.

“You didn’t know if you would be there the next week,” DiBenedetto said, recalling the early goings, circa 2008 when advertisers no longer could afford to purchase ads and investors were running out of money. “You just didn’t know if the lights would be on.”

To get through the tough times the magazine’s founders, Rebecca Wesson Darwin, a former publisher at the New Yorker and Pierre Manigault, the chairman of a small publishing company, had to take a gamble.  They had to pony up their own money and buy Garden & Gun from its languishing seed investors.  So, they did.

After doing so, the two had cut staff and rely on a skeleton crew of dedicated writers who believed in the magazine’s vision, which was as one employee described it, “a love song to the South.”

Even after streamlining operations, the outlook was uncertain.

“There was no guarantee that the magazine was going to survive,” Sid Evans, who was Garden & Gun’s editor-in-chief from 2008 to 2011 before moving to Time Inc, told the NY Times. “But there are a lot of people out there who love a good read. They love being in the hands of a good writer and the insights those writers have.”

In 2010, the bimonthly had a stroke of luck.  One its loyal readers, Edward Bell III, a lawyer from Georgetown, South Carolina, saw the potential in the magazine which covers all aspects of southern life from cooking to camping, etc. (or as CBS’s Jeff Gohr put it, everything but “Politics, religion and SEC football”) and decided to invest to help Garden & Gun reach a larger audience.

Bell’s infusion of cash allowed Ms. Darwin to do two important things, bring back most of her staff from the early goings and create a national sales teams.

Since then, the magazine has enjoyed steady growth (almost a quarter million subscribers), won awards (a 2011 American Society of Magazine Editors award) and attracted some top rate advertisers (Audi, Le Creuset and Brooks Brothers).  Things, it appears, are on the up and up.

It should be noted that Garden & Gun is not a gun publication in the traditional sense or in the way Guns.com is.   It definitely covers gun-related topics: hunting, sports shooting, etc., but isn’t generally concerned with the day- to-day affairs of the gun community.

Consequently, there have been people within the publishing industry who have recommended that Ms. Darwin remove “Gun” from the magazine’s title so it becomes more palatable to potential (politically correct) readers, i.e. an argument like, “if it’s not really about guns, why have that lightening rod of a word “gun” in there?”

In fact, Ms. Darwin has considered this suggestion.  She told the New York Times that she might someday shorten it to G&G, in a similar vein as GQ.

Personally, I think it’s a horrible idea.  And I would make this recommendation, Ms. Darwin don’t take the “Gun” out of Garden & Gun and don’t abbreviate the title.  Whether your publishing pals in NYC like it or not, guns are a big and important part of American culture.  So, don’t be cowed by political correctness.