Russian roulette seems like it might be a fun game. Well, let us rephrase that a bit. If you could somehow get rid of the whole suicide thing and the need to explain to the missus why your buddy’s brains are all over the new drapes, then it would probably be a fun game.

We’ve got good news! Now you can play Russian roulette with your pals, or at least a watered-down version that won’t put everybody in jail.

The company Can You Imagine is selling this Party Roulette toy, a plastic gun that uses balloons as ammo. The concept is as ingenious as it is simple. First, you fill up a balloon with water or air, and then you put the balloon in the loop. All of the gun’s chambers are empty, save for one needle that pokes forward when you pull the trigger. 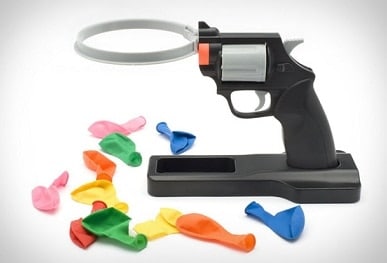 Spin the cylinder, point it at your head, and then experience butt-clenching terror as you wait for a “click” or a “pop” to tell you your fate.

Buying one of these party toys will put you back $18 – a small price to pay for a game that easily trumps “never ever have I ever”, “quarters”, betting on who’s going to throw up first, and other classic party games.

We checked a few of the Amazon reviews and while most buyers give the toy a thumbs-up, there’s always the party pooper who thinks that anything loosely resembling a firearm should be thrown into a rocket ship and launched into the sun.

The Amazon user wrote, “I can see this going bad, real bad. Teach your kids to put a fake gun to their head and pull the trigger. It doesn’t matter what it’s loaded with, it’s the action involved. Holy smokes, get a real toy. Don’t buy it. This has to be worst idea ever. Intelligent factor Zero.” Call it a hunch, but we’re betting the person also loves being the designated driver.

Others didn’t have such a knee-jerk hatred of firearms, so they were willing to have a bit of fun with it. Others said, “I can’t change what’s already happened. I tried to focus on the odds, the money. There was over $13.00 on the table, and already two others had splattered the wall with a Jello-like substance. I tried not to think of their futures, their families and lives. But it was my turn again, and winner took all. Every time I bit the barrel, I saw my life flash before my eyes. Somehow, I knew. I knew this was the one. I closed my eyes, pulled the trigger, and BAM. I shot myself through the back of the skull. I’m just laying now, thinking to myself, what a fool I was. My life is now at an end, and I wish the odds had been mine.”

Whew, that sounds intense. Without doubt, this game might be too much for some people to handle. Can you deal with your pressure? Do you have the guts to pull the trigger as your friends scream “Mao! Mao!” at you in their best Vietcong accent?

Now, if you’ll excuse us, we have to go blow $20 on the best drinking game prop ever invented.