Judgement: Cutting through the .410 Revolver Hype

The Judge.  I had really hoped that the buzz would die down, but it has not.  I still meet people who want to talk about how great this type of gun is for disemboweling bad guys.  They want to show me the silhouettes, paper targets that have been shredded by the dark clouds of birdshot buzzing from their short barreled .410s like swarms of bees in old Wiley Coyote cartoons.

Paper bad guys.  If I were a paper target, I’d be terrified of the Judge.

But let’s be real.  Nothing against Dick Metcalf, at all.  I respect him and his work immensely.  But this is a non-lethal approach to self defense.  Depending on the build of the attacker in this scenario, and how much clothing he has on, birdshot is only a deterrent.  Not that it wouldn’t be effective.  I’ll admit that.  But there is a also a chance that it wouldn’t be.

That’s not a risk I’m willing to take.

Look closely at the 1:50 mark in this video.  There seems to be very little backing to this target.  The holes that appear here on paper are not the equivalent of the wounds that would appear on a human torso.  They may actually have been caused by the plastic wads, which will go trough some paper.

Why is it so hard to find actual data on the various .410 loads as shot through a short, rifled barrel?  Has it not been measured?  Is is not in the best interest of all concerned to publish such data?  Federal is often cited as a good choice for loading up the Judge.  They even make a .410 shell designed for the Judge.  It is a 2.5 inch #4 buckshot load that hits speeds of 950 feet per second.  But they don’t say what barrel length they are using.

Why don’t they say?  It may be because they are testing the load in a smooth-bore shotgun that is reasonably long.  If not, if they are actually getting a result of 950 fps from a two inch barrel on a Taurus Judge, than they should say so.  To omit such a wonderful fact seems a terrible oversight on Federal’s part.

It would be helpful if there was some good unbiased testing.  Anyone out there know of any actual chronograph tests of various .410 loads from different Judge models?  I’d love to see them.

In the meantime, this is what we get.

I have to hand it to Taurus here, and to Smith & Wesson (who make a similar gun, The Governor).  The folks who love these guns love them passionately.  And they may be the biggest driving force behind the platform’s popularity.  But shooting jugs of water, or fruit, isn’t really enough.  Unless you are buying a gun to shoot fruit.  Shooting jugs of water will allow you to approximate effectiveness.  That’s all.

What is the Judge actually good for?

It has its uses.  The Taurus Tracker is perhaps the most ideal ranch sidearm.  With a mix of .410 birdshot, buckshot, and .45 Colt it would

handle just about anything that slithers or slinks about.  A .45 Colt will dispatch a seriously wounded animal (especially from close range).

The longer barrel will tighten the shot pattern and increase muzzle velocity.  The full size gun will have manageable recoil, and the full size grip will allow for better control. It will never be the most accurate revolver available.  There is too much free space for a slug to travel in the cylinder.  Still, this is an improvement in design and function that deserves much more press than it has gotten.

I had a chance to review the Rossi Tactical Circuit Judge awhile back.  Though that guns makes more sense to me than the snub-nosed Judges, it seemed a bit ambitious.  It isn’t a tactical weapon.  Too big, I think, is just as absurd as too small.

The .410 platform is great for different tasks.  It just isn’t the best platform available for self defense.  And that’s why people are buying them.

Yes, these guns can kill people.  Sure, they punch some mean holes in paper.  They’ve even busted up a watermelon or two.

I think people’s minds are already made up.  These guns sell well.  It pains me greatly that they’re being sold in the name of self defense.  I believe companies have a responsibility to market products honestly.  And the scenarios they set up for demonstration purposes are only partially honest. 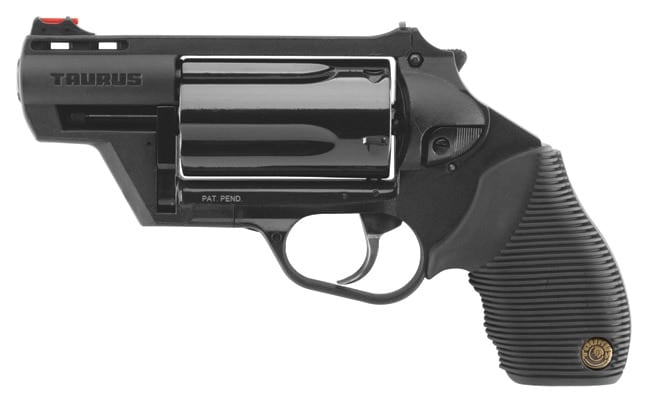 But I think this is negligent.  It comes down to this.  There are two types of lies: lies you tell and the truths you withhold.

This is the lie they are selling.  .410 revolvers are marketed as effective self defense guns, and Taurus and others use birdshot to demonstrate the guns’ abilities.  But a broad pattern of bird-shot from a .410 shot-shell may or may not be lethal.  And I would not advise anyone to shoot anyone they are not prepared to kill.

I will concede that with a .45 Colt slug, or .410 buckshot, that these guns can be quite lethal.  But here comes the truth they withhold.

Listen to the stories people tell to defend their .410 revolvers.  I heard a good one recently.  A .410 revolver carrying friend of mine said something like this, “the .410 is perfectly effective!  I’ve known people who have taken deer with .410 slugs!”

This is how the logic breaks down.  The Judge (his is one of the small ones, loaded with birdshot) is effective as a self defense tool, against other human beings, because someone somewhere has killed a deer with a .410 slug (shot, no doubt from a shotgun).  Right.