The Problem with the National Shooting Sports Foundation’s #Gunvote Movement

The National Shooting Sports Foundation, the firearms industry trade association, is putting its support squarely behind the Republican Party with its #Gunvote Movement.

Should we be surprised or angry that the NSSF is pushing for the GOP this election?

Well, no.  Not at all.  An objective look at the RNC and the DNC party platforms shows that Republicans are indeed pro-gun, pro Second Amendment and the Democrats are pro “reasonable regulations” such as renewing the “Assault Weapons Ban” and closing the “gun show loophole.”

I think my only beef with the NSSF is the way in which it plays politics.  That is to say, the organization is clearly rooting for the GOP, but it refuses to openly acknowledge it.  Instead, the NSSF plays these weird political games of indirectly telling gun owners to vote for the Romney-Ryan ticket by pretty much instructing them not to re-elect President Barack Obama.

Then it tells you, the voter, to “Take no chances” in November followed by (cue that damn, annoying bell sound) “One vote stands between you and your rights.”

What is the NSSF telegraphing here?  Well, if you can’t tell you’re – to use a euphemism – being obtuse.

Frankly speaking, the lack of candor in these ads is quite laughable.  To put it in a different context, if you wanted to go out with the pretty girl, would you simply tell her not to go out with a rival suitor in the hope that she would go out with you?

Another example of this passive, ‘we-have-to appear-politically-neutral’ approach is exhibited in a recent NSSF article, entitled “The ‘Forward’ Momentum of Backward Ideas.” 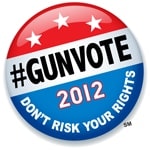 Essentially, the premise of the article is that the Democrat’s slogan of moving ‘Forward’ actually “means the Democrats want to move backward with their nostalgia for the anti-gun fervor of the 90s.”

Now, the NSSF gets the facts right.  Democrats like Sen. Dianne Feinstein are, indeed, aggressively pursuing gun control legislation and Obama, himself, has expressed support for renewing the AWB.  So, the conclusion a reasonable person would draw is: if you place a high value on your 2nd Amendment rights, you should vote for the Romney-Ryan ticket.

But the NSSF doesn’t explicitly say that.  Instead, we get the following tacit, half-hearted endorsement for the GOP candidates from the NSSF: “When “forward” actually means “backward,” gun owners know to turn the other direction.”

What direction?  Should we look to Ralph Nader or Ron Paul or Ross Perot?

All joking aside, I’m sure there’s a reason why the NSSF plays it coy, i.e. it’s not a political organization and not everyone in the firearms industry is a GOP acolyte – but at the same time, playing politics while attempting to remain apolitical makes the organization look foolish.  Gun owners see right through these, what they call, “voter education movements.”

Hence, it’s time for the NSSF to quit beating around the bush and just admit it: “We’re asking gun owners to support Romney-Ryan in 2012.”  There, that wasn’t so hard – was it?

(Note: my criticism of the NSSF is all in good fun.  I have a ton of respect and affinity for the organization, I just think it should be a little more honest with itself.)