On Monday, a Quebec court ruled that although Canada’s conservative federal government decided to scrap the nation’s long gun registry back in April, provinces have the right to access that information before it is destroyed so that they can actively maintain their own registry.

“The data are shared by the two governments, federal and provincial, and the federal government can’t proceed to destroy all that data collected by all the members of the partnership. It is a partnership between the two. One cannot destroy all the data simply because it wishes to without the consent of (the other partner),” Justice Marc-Andre Blanchard said in his 42-page decision.

Justice Blanchard gave Prime Minister Stephen Harper’s government 30 days to hand over the registry data it has for the French-speaking province, where pro-gun control sentiments are popular.

One of the lawyers for Quebec, Eric Dufour, applauded the decision, happy to report that citizens of Quebec would still need to register their firearms.

“If there is something to get across to the public, it is that this means things are status quo for the long-gun registry,” Dufour told the Associated Press. “In practical terms, for the people of Quebec, it means that all transfers of long arms and hunting firearms are still required to be registered with the controller of firearms.”

Not surprisingly, the fed wasn’t too pleased with Blanchard’s ruling. 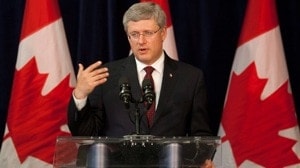 “I am disappointed with today’s ruling and will thoroughly review the decision,” Public Safety Minister Vic Toews said in a statement.

“The will of Parliament and Canadians has been clear. We do not want any form of a wasteful and ineffective long-gun registry…

“Our Conservative government will continue to fight against any measures that needlessly target law-abiding hunters, farmers and sport shooters.”

In other words, they plan to appeal the decision, in which case it will probably end up before the Supreme Court of Canada.

Proponents of the registry argue that it played an important role in reducing crime over the past 15 years (it was established in 1995).   They told the Montreal Gazette that the overall number of homicides in which a shotgun or rifle were used dropped 30 percent and the province is seeing “a marked improvement in the fight against the trafficking of illicit firearms.”

“I know that the (federal) government is going to say that the registry hasn’t saved one single life,” Heidi Rathjen, a spokesperson for gun-control advocacy group Polysesouvient, told the Gazette. “But it is an essential crime prevention tool.”

Despite what gun control proponents contend, the answer to that question is unclear.  However, what is clear is that the national registry was an enormous hassle for law-abiding gun owners, in addition to being a huge expense for taxpayers (a total of $2 billion was spent on the program.

That said, should the fed just hand over the data to Quebec?  Or should it tell Quebec, as it has in the past, if you want to run a registry, you’re on your own?