In a recent review of Heckler & Koch’s MP7 compact personal defense weapon (PDW), RECOIL Magazine editor Jerry Tsai pointed out that the firearm, because of HK’s own restrictions, was not available to the general public. This wouldn’t be so bad on it’s own, that is HK’s policy; the problem is that Tsai agreed with it.

“The MP71A is unavailable to civilians and for good measure. We all know that’s technology no civvies should ever get to lay their hands on. This is a purpose-built weapon with no sporting applications to speak of.” (Emphasis ours.) The sky’s the limit with the problems with that sentence. First and foremost is the idea that “civvies” have to have some reason to own certain guns. That somehow guns with “sporting purposes” are any less dangerous than those designed for combat. 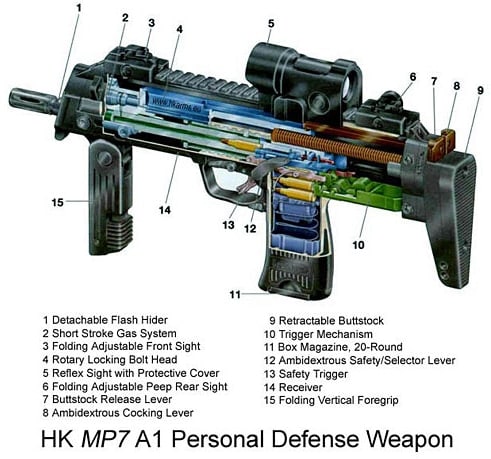 And then for Tsai and RECOIL Magazine, things went from bad to worse when the editor defended his statement and clarified his position, saying, “Like we mentioned before, the MP7A1 is unavailable to civilians and for good reason. We all know that’s technology no civies should ever get to lay their hands on. This is a purpose-built weapon with no sporting applications to speak of. It is made to put down scumbags, and that’s it. Mike Cabrera of Heckler & Koch Law Enforcement Sales and veteran law enforcement officer with SWAT unit experience points out that this is a gun that you do not want in the wrong, slimy hands.”

To top it all off, in his second statement, Tsai further aggravates by stating that law enforcement officers aren’t civilians. Unless they’re part of the armed forces, they’re civilian alright. And by lumping all non-military (and non-LEO) people in with the “wrong, slimy hands” Tsai may have permanently shoved his foot in his mouth. We’re not alone in the belief that people don’t have to justify owning guns, any guns.

Eventually, Tsai responded with an apology, although that stretches the definition of apology pretty thin. “Is it wrong that HK decided against selling a full-auto pocket sized machine gun that can penetrate armor from hundreds of yards away? … I believe that we as gun enthusiasts should respect our brothers in law enforcement, agency work and the military and also keep them out of harms way. Like HK, I wouldn’t want to see one of these slip into the wrong hands either. Whether or not you agree with this is fine.”

Sponsors of RECOIL Magazine are jumping ship. So far we can confirm that Bravo Company USA, Haley Strategic Partners, Imminent Threat Solutions (ITS Tactical), Rifle Dynamics and Pantaeo Productions have all pulled their ads from future issues of RECOIL, in addition to major players Magpul Industries and Silencerco. Other companies have not officially stated that they will end their relationships with RECOIL, but have or are considering pulling their ads, including Advanced Armament Corp., LaRue Tactical, Teludyne Tech Industries and SureFire. 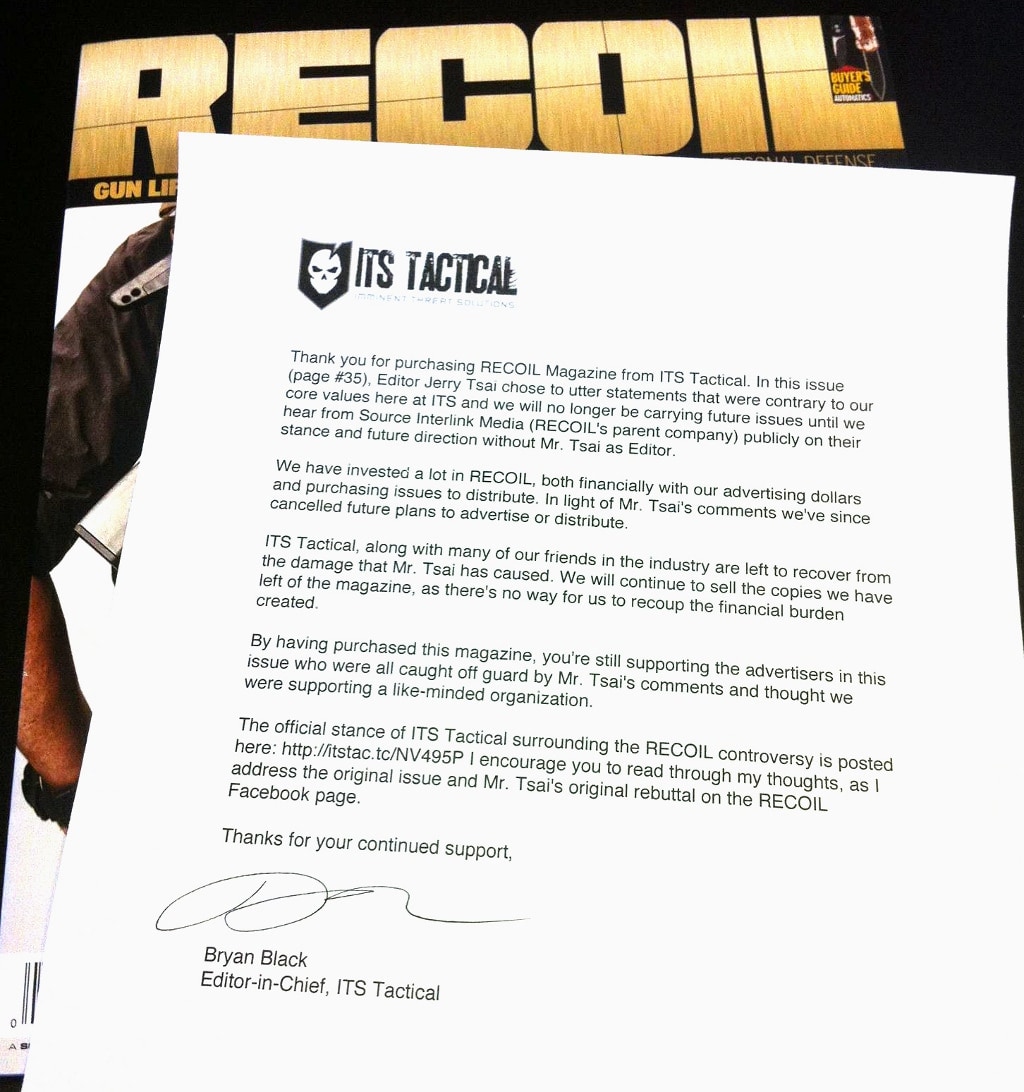 There’s even a Dump RECOIL Magazine Facebook page now, encouraging people to come together in rebuking the publication and urging other companies to end their dealings with them.

All these sponsors and a large number of readers agree that they can’t continue with RECOIL as long as they have these sort of opinions surrounding gun ownership. Rifle Dynamics went so far as to ask for Tsai’s resignation for their reconsideration. But as RECOIL is Tsai’s personal project, that may be unlikely.

RECOIL may have been light on content and heavy on pictures, but they, until now, always put guns first. Unless they make some severe changes the publication may never recover. Still, it may not matter much to the bulk of gun enthusiasts, many who had already flagged RECOIL as lite media. Said Andrew Touhy of the Vuurwapen Blog, “RECOIL magazine sucks a little bit because the editor is a ‘sporting purposes’ clown. Recoil magazine sucks a lot because the articles are written on a fifth grade level by people who don’t know anything about guns.

“As a friend said, ‘Recoil magazine is Sky Mall for gear queers.'”

RECOIL Magazine is part of the Source Interlink Media group.