On Aug. 5, Wade Page went on a shooting rampage throughout a Sikh temple in Oak Creek, Wisconsin, killing six people and leaving four seriously wounded. One police officer ended Page’s shooting spree with a well-aimed shot to the stomach, and his police cruiser dash-cam caught the whole thing on tape.

We could spend paragraph after paragraph analyzing the footage, but it’s best that you take a look for yourself. Keep in mind that at this moment nearly a dozen people have already been shot, including first responder Lt. Brian Murphy. Wade is a barely visible white-above-black speck in the distance, just to the right of the road.

“I’ve seen the video – it was an amazing shot,” said Teresa Carlson, the FBI agent in charge of the Milwaukee division.

Yeah, no kidding. Officer Sam Lenda, the hero who’s standing just outside of the camera’s field of vision, was standing approximately 75 yards away from Page when he made the shot with his rifle. Lenda hit Page dead-center mass in the stomach. Page can be heard a few moments later taking his own life, an action that was probably unnecessary – Agent Carlson believed that the shot to the stomach would have been fatal.

So, how did Lenda hit a distant, moving target under a hail of gunfire? A lifetime of dedication. This 32-year veteran of the force served as the firearms instructor for the MATC police program and for basic SWAT and sniper training.

A fellow criminal justice instructor, Tim Talaska, said he wasn’t surprised that Page made the shot from so far away, citing his “good mental attitude” and “extensive training.”

But Lenda isn’t the only hero of the story. Fifty-one-year-old Lt. Brian Murphy showed incredible selflessness on the scene. Oak Creek Police Chief John Edwards explained, “He had been shot nine times — one of them very serious in the neck area — and he waved (rescuers) off and told them to go into the temple to assist those in there.” 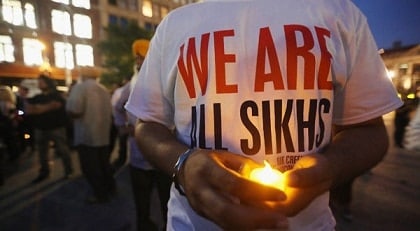 Edwards was hospitalized, but he was somehow able to survive these multiple gunshot wounds and he has since been discharged.

While police officers are saluting Lenda and Edwards for their heroism, members of the community are showing their respect in a very different way. Sikhs, Muslims, Christians, Jews, atheists, and others have come together to mourn those who were lost during the massacre. Mark S. Hanson, the presiding bishop of the Evangelical Lutheran Church of America, said, “This is a time for public mourning and public lament.”

Somewhat unintentionally, this unified support is something of a big “screw you” to Wade Page. Police are still trying to determine what could have caused the shooting rampage, but they suspect it has something to do with his connections to white supremacist groups. The goal of organizations like those is to divide America along racial and religious lines, but our nation’s response has been to ignore our differences and show our support to people of all races.

At the end of the day, it looks like compassion and unity wins out over hate and bigotry.