Where have all the Spam Cans Gone?

I have a deep and abiding love for the AK-47.  I’m a child of the Cold War (the end of it, at least) and the banana clip, as I grew up calling the AK’s magazine, was as iconic as the banana seat I had on my Huffy dirt-bike.

When I ran through the woods of northern Florida, shooting at my friends with a borrowed Crosman 760, I pretended it was an AK, not an M-16.  I was never a soldier in these games.  I was a survivor, like the scrappy rebels in Red Dawn–one of the best worst films of 1984.

So I was more than excited to get an Arsenal AK in for review.  I assumed it would be easy to find surplus ammo. 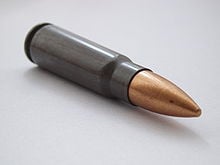 There’s plenty of 7.62×39 available.  There are more options now than there have ever been.  But the pipeline that kept the old communist warehouses filled with mil-spec 7.62×39–what the Soviets called M43, or M67 have certainly slowed down.

Easy.  Supply and demand.  The old Soviet block figured out that Americans loved the AK-47. When they did, they packed crates of ammo on ships and sent them to us, cheap. It was a good way to make some quick money.  And we ate it up.  Or our AK-47s did.  Few of us actually considered that there might be an end to the supply.

There is still actual surplus 7.62×39 ammo available.  A sealed “spam can” should last longer than its owner.  These cans, sometimes still in their crates, are for sale, for a price.  Many AK-47 owners bought the crates and cans and stockpiled these old Warsaw Pact relics.  You know, for Zombies and such.  Check out the various Internet forums and you’ll find ads from private sellers.

There are plenty of makers still making the 7.62×39. Many of these old factories, especially in Russia and the former Soviet Union, had been making 7.62×54 and were simply retooled for the shorter 7.62×39 AK-47 rounds.  But some of those factories are now filling contracts (and warehouses) with 5.45×39 for the AK-74. 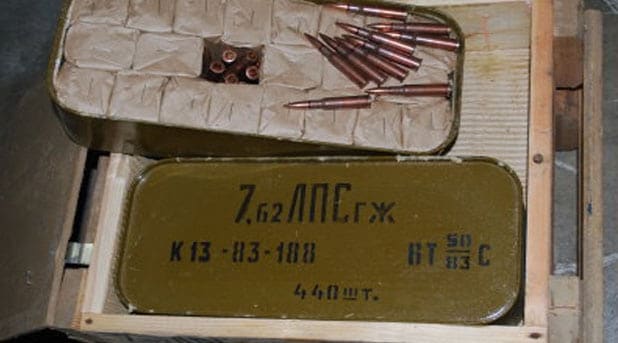 If you want the old fashioned 7.62×54, there are crates of it. The real deal. You Mosin Nagant fans are still in luck.  But even that is slowly going up in price.

If you want an old 7.62×39 crate, those are available. But they’re empty.  While they make a nice conversation piece, they are still depressingly empty. 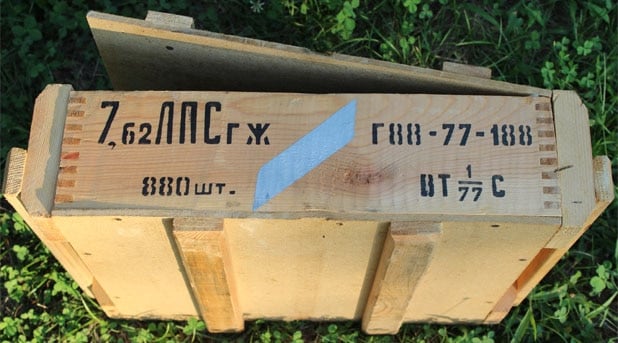 This is where things get a bit ironic.  First, we call these things Spam cans.  The old Soviet era rounds were meant for defense (or offense) against the same capitalists who would later buy them, and give them a very American nickname.  Is anything more American than Spam?

You can still buy cans of 7.62×39 retail. But they are not what they claim to be. These are not leftover mil-spec Spam cans. These are post Cold War cans, made specifically for us American AK-47 fanatics.  How do I know?

The writing is in English. Very few of the Warsaw Pact countries labeled their guns and ammunition in English. 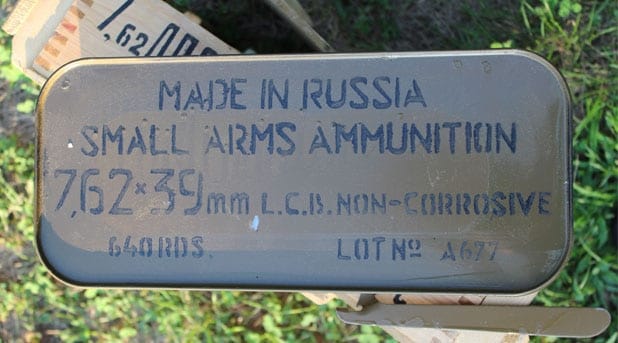 And when you open up the can, the individual rounds are boxed, just like they would be if you bought them individually.

The newer capitalists at Tula know that the American AK owners like old Cold War ephemera, and so they sell it to us.  But they also know that we have a hard time reading anything other than English.

That’s fine with me.  Many of the AK’s on the market today follow this same pattern.  They aren’t surplus.  They were sporterized just for us.  And then rebuilt to look like the real thing.

It doesn’t make any difference, really.  The AKs and the available rounds shoot fine.  There are opinions about which of the old manufacturers made better rounds, or used better components in making them.  But these new sealed cans are still built to last.  And 640 rounds will cost somewhere near the $150 mark.  The rounds probably won’t have brass cases.  Most won’t have corrosive primers.  But the zombies won’t care about the labels on the can, or the lacquered steel cases.  So stock pile all you want.  Just don’t lose that little can opener.

As for me, I have an Arsenal AK to review.  So I’m fixin’ to open up a brand new Spam can and get to work.