Brad Pitt on Guns: 'America is a Country Founded on Guns'

Brad Pitt and I share something in common.  And no, it’s not what you’re thinking (to answer your question, no, I’ve never dated Angelina.  She did ask me out once, but I turned her down.  She’s just not my type; I prefer more adventurous women).  What Brad and I have in common is that we both love guns.

Now, it might be a bit of a stretch to call Brad Pitt a gun nut, but then again maybe not considering (a) he recently bought Angelina a shooting range as an engagement present and (b) his recent comments about guns and gun ownership in an interview with The Daily Mail. 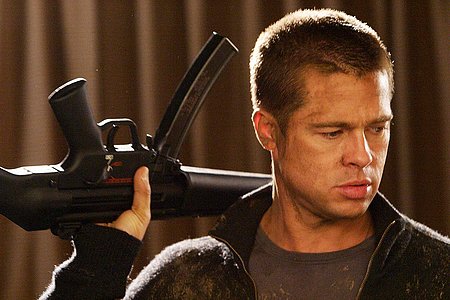 “America is a country founded on guns. It’s in our DNA. It’s very strange but I feel better having a gun. I really do. I don’t feel safe, I don’t feel the house is completely safe, if I don’t have one hidden somewhere, Pitt told the UK Publication. “That’s my thinking, right or wrong.”

Let me back you up on this Brad, you’re right and you’re not alone.  According to numerous polls and surveys, approximately 100 million American gun owners feel the same way you do.

And our country was, indeed, founded on guns despite what some academics may argue.  The evidence is right there in our Constitution, for all to see.

Pitt continued on his love affair with firearms, elucidating how he was raised in the thick of gun culture.

“I really feel like I’ve hit the lottery,” Brad added, upon reflecting on his upbringing.

But given the context of the interview, in England, where guns are tightly regulated, the conversation quickly evolved to the topic of gun control, which has widespread support (at least amongst those in power).

“I was in the UK when the shootings happened [Colorado and Wisconsin] and I did hear the discussion about gun control start again, and as far as I know it petered out as it always does,” Pitt said.

“It’s just something with us. To turn around and ask us to give up our guns… I don’t know, we’re too afraid that we’re going to give up ours and the bad guys are still going to get theirs. It’s just in our thinking. I’m telling you, we don’t know America without guns,” Pitt surmised.

Unfortunately Pitt’s wrong about the debate, it is still raging on and several Democratic lawmakers are angling to renew the ‘Assault Weapons Ban,’ close the putative ‘gun show loophole’ and ban the sale of online ammunition.

We can only hope that it peters out, but something tells me that NYC Mayor Michael Bloomberg and his coalition of politicians – Mayors Against Illegal Guns – are not going to go gently into that good night.

Now Pitt’s comments are likely to ruffle the feathers of some of the pro-gun control advocates in the Hollywood elite, but I’m sure he could care less.  After all, he’s got his guns, his money, and Angelina Jolie.  Life is good.

(Okay, you got me.  I lied.  Angelina Jolie is my type.  What really happened, I was in a relationship when she asked me out.  That’s why we never dated…)