A friend of mine is studying to be a gunsmith asked me recently what I would do if I were going to design a gun.  At first, I thought we were just talking.  Then I realized he was serious.  But the sad thing is, I simply don’t know.  I have no idea.

I had never considered what a gun would look like, if I could design it and build it from scratch.  But I like the idea.  And it got me thinking about the classic designs, and about the really odd-ball innovations.  I have just as much respect for the guns that look radically different.

Here are four guns that are currently in production that seem to completely buck tradition.

FN is an innovative company.  I knew I would include at least one of their guns in this list, and it was honestly a toss up between the P90 and the F2000.  But my imagination is really set off by the P90. 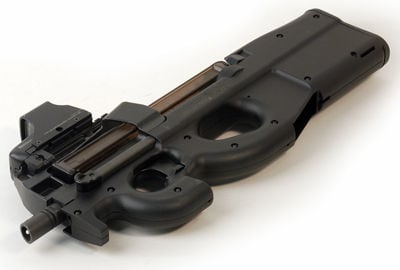 There are three really unique features to this gun.  First is the ergonomic layout of the grip and trigger guard (which doubles as the foregrip).  This keeps you tucked in on the gun (like holding an AR-15 by the grip and magazine).

The second is the clear magazine.  The rounds, 50 of these tiny things, lie on top of the gun.  The spring tension pushes them down toward the stock, where they spin and drop into the action.  This makes it easy to see exactly how many rounds are left while shooting.

The third feature is the built in reflex sight.  I’m still not sure how I feel about this, exactly, as I’m a sucker for good iron sights.

Still, this is one of the most incredible close quarters combat weapons.  The bullpup design almost always looks a little bit futuristic.  But the top loading magazine makes the experience even more unusual.  Despite the weirdly futuristic look, the P90’s high rate of fire (900rpm), superb magazine capacity and short length make this a logical choice for contemporary urban combat.

The Rhino is one of the strangest looking guns currently in production.  The five inch version has vents where the barrel should be.  It is so ugly that it is endearing.  The angular lines make it visually distinct.  The lowered barrel, especially in longer models, makes it look (and shoot) even less like a traditional revolver.

Its barrel aligns with the bottom chamber of the cylinder instead of the top, however, the design isn’t original. It was introduced in 1997 with a revolver called the Mateba, which was popularized by Japanese anime Ghost in the Shell and a few American sci-fi flicks. Although the original design never took off, it did in fact reduce recoil.

This would be my top choice for a prop for a pseudo space opera with a bit of the used-future feel.  Something between the cantina scene in A New Hope, and Joss Whedon’s epic series, Firefly. 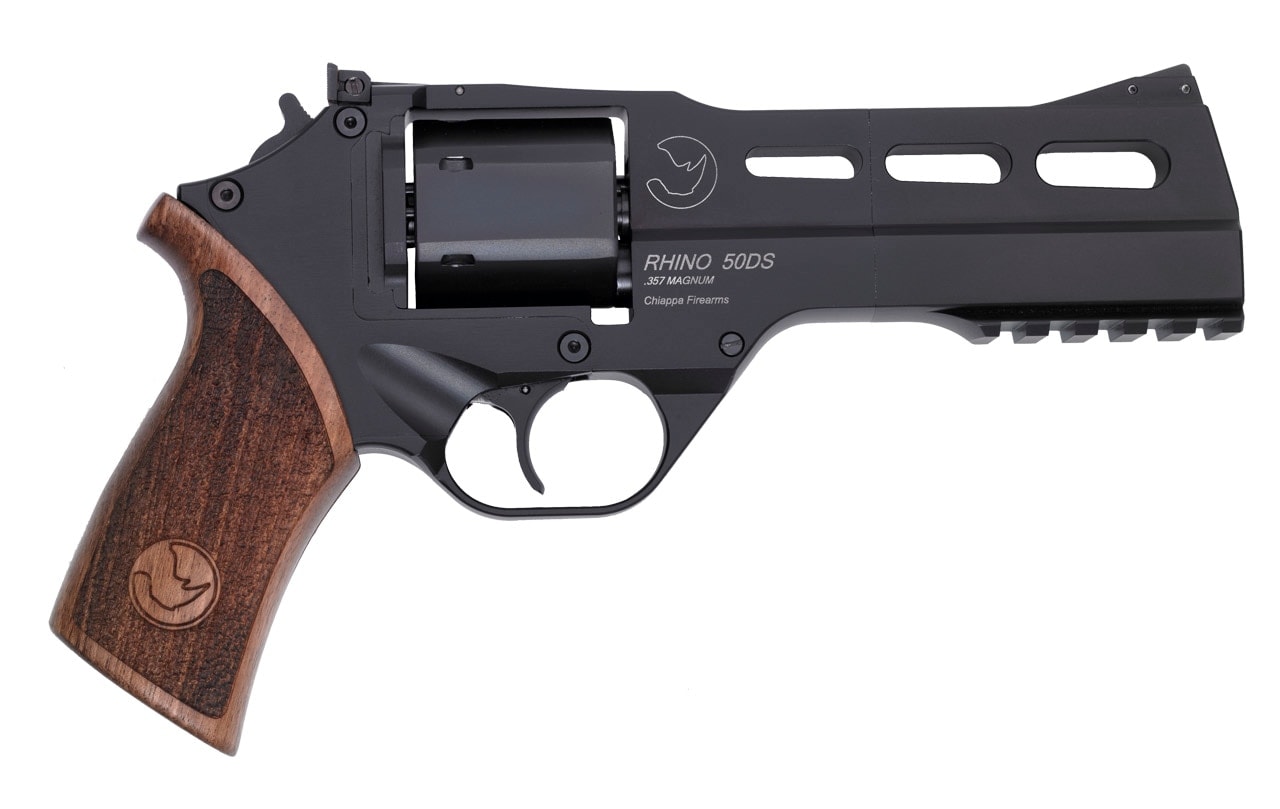 I’m still undecided about the functionality of the Rhino.  I’ve shot one, and I liked the way it worked.  No complaints there.  But I can’t stop staring at it.  No matter how I turn my head, it still looks strange.  And the sights are so tall that it is like aiming a pistol with AR-15 sights.

If I were designing a gun for the future, I’d make something like an Atchisson Assult-12. This is one of the most brutal guns in (limited?) production.  The automatic shotgun, especially with the drum magazine, puts a tremendous amount of lead downrange.  Or flechettes.  Or fire.  This beefy 12 gauge looks like something designed to annihilate little green men.

This is my favorite video of the AA-12.  Good clean fun.  Only with some language, for those of you who are sensitive to such things.

The AA-12 has changed hands a couple of times.  It is currently being made by Military Police Industries (no website), and the information on the production numbers and availability is scarce.  But they exist.  And they look like a blast.

Is it really innovative in any way (besides being a functional automatic shotgun)?  I’m not sure.  It looks mean–but it is big.  And it is so oddly monolithic that it can’t be customized easily.  No changing stocks or grips.  I bet the Saiga 12 will completely kill the AA-12 before too long.  The Saiga simply allows you to do more.

The Beretta U22 Neos

Some of our current futuristic looking guns come from the past.  The Beretta Neos is a great gun, but an odd looking one.  This seems to be common to .22 LR pistols.

The grip has a steep angle.  Grip angle has been evolving slowly.  This steep angle has more in common with the 19th century revolvers and guns like the Luger.  But when packaged like this, the grip evokes an 1930’s era representation of “the future.”  The Neos has a wild grip texture, too,  that I’ve always thought of as alien alligator. 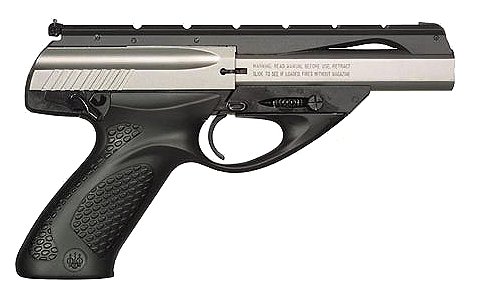 What’s most unusual, I think, is that it bears almost no similarity to the rest of the Beretta line.  The Neos is as functional as the others, if not as popular.

The pedigree of the Neos is easy to trace.  There are several other guns with a similar look, most notably the old .22 LR Whitney Wolverine. 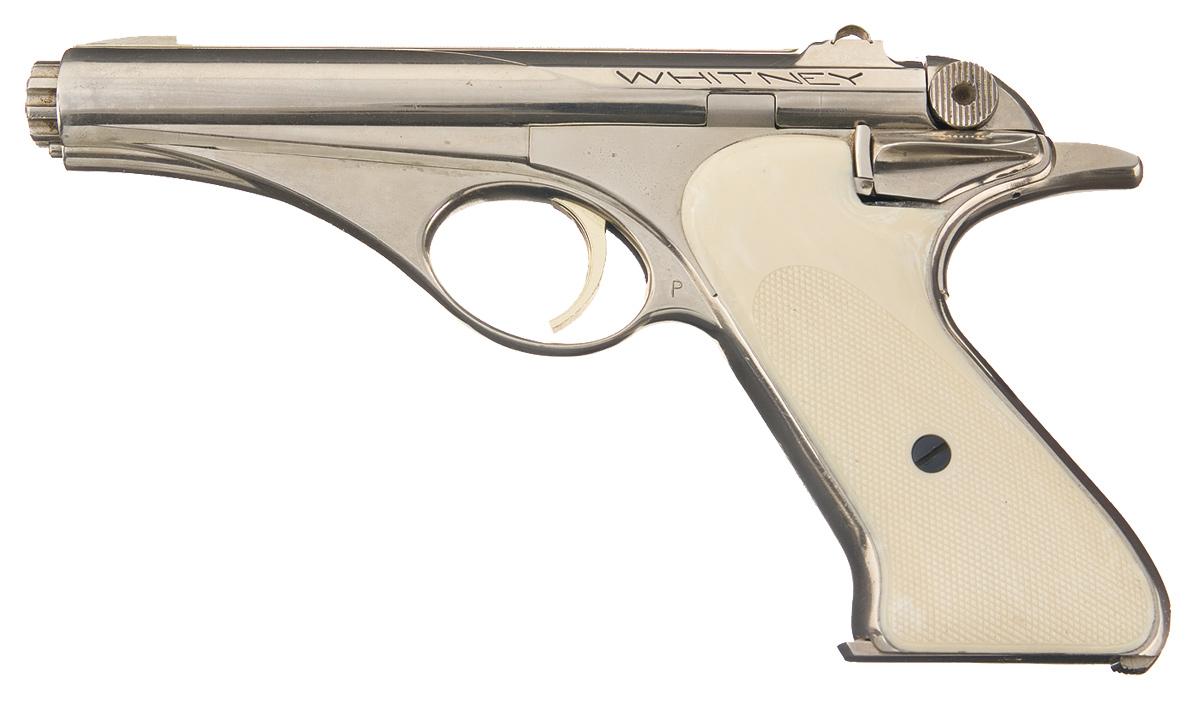 The Whitney Wolverine was made from 1955 to 1962.  But there is an updated version available form Olympic Arms.  I want an old Wolverine and a full set of silver spandex and a helmet with wings.  Only then will I be able to solve all of the world’s problems.

Each of these guns is a radical departure from aesthetic tradition.  The results are guns that work well, but end up looking like sci-fi movie props.  Or they become movie props, like the FN P90, or the Rhino, or the AA-12, or the Neos, or the Wolverine (which doesn’t have an IMFDB page yet).

I don’t know what my gun would look like, if I were to design one.  I spend way too much time critiquing other people’s guns.  Now I’m thinking about it differently.

I admire those who chart new territory with their designs.  Especially the ones who are willing to make some crazy works of art.