The people of Illinois are a bunch of rebels.

“We don’t care if the other 49 states allow for concealed carry – we’ll control guns as much as we want!”

“We’re sticking with the folks in Arkansas and we’re going to keep using silent letters. Just try to stop us!”

Well, one Illinois senator wants to bring Illinois another step closer to joining the rest of the country (on the concealed carry issue, not the silent “s” thing). State Sen. Gary Forby held a public meeting yesterday in Marion, Illinois, to speak with the public about changing Illinois’s concealed carry laws. And here’s the surprising thing: Gary Forby is a Democrat! 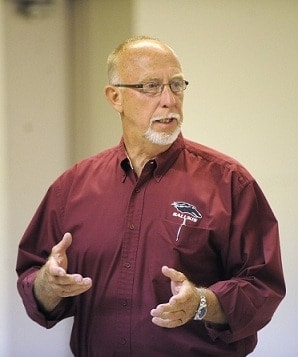 Democrats and gun owners haven’t always seen eye-to-eye on the whole gun thing, but this democratic senator is definitely on the side of gun rights.

He said on his website that Illinois Gov. Pat Quinn, who vowed to veto pro-concealed carry legislation, “is completely out of touch with what the people outside of Chicago want on this issue.” Forby added, “It’s ridiculous that 5 million people who don’t trust their law-abiding neighbors enough are the ones blocking this right from 7.5 million other citizens.”

Illinois citizens who went to the meeting were in for a bit of good news. Illinois is now closer than ever to being able to vote new concealed carry laws into the books.

Todd Vandermyde, a lobbyist for the National Rifle Association who also spoke at the town meeting, explained, “According to our vote count, we’re right at the tipping point of having a super majority of 36 senators to vote for a carry bill, which would be enough votes to override a gubernatorial veto.”

So far, Forby has introduced several bills that protect gun owners’ rights. He introduced a concealed carry measure into the senate and he also pushed a bill that would lower the eligibility age to apply for and obtain a Firearm Owner’s Identification Card (FOID) card.

Of course, this might depend on whether or not Forby returns to the Senate. Republican state senate candidate Mark Minor is challenging Forby for his seat in the 59th Senate District on a similar pro-gun platform. Minor said in a press release that politicians have been talking about concealed carry laws, but now it’s time to get results.

In all fairness, that’s kind of what Forby has been saying, too. The pro-gun movement has been winning battles in Illinois for years now, but now it’s finally time to win the war. Only one question remains: Who will lead the charge?