When my father died a couple of years ago, I inherited a couple of oddball pistols.  One was a Savage Model 101, a pseudo-revolver single shot novelty.  The other was a German eight shot revolver with an 8-inch barrel.  I kept the Savage and sold the revolver without a second thought.  I don’t even remember the brand.  All I remember is that it shot straight and I sold it for a bag of beans.

And now I’m kicking myself.  I didn’t really see the point in a .22 revolver, but now I’m feeling just a bit under-prepared.

When looking at .22-caliber handguns, I see two clear distinctions.  There are those with automatic actions, like the venerable Ruger Mark III (and countless others).  Then there are wheel-guns, like the Ruger SP101.

The Mark III is a tremendous firearm.  Ruger has been making the gun since 1949.  It started as the Ruger Standard, though I think it goes farther back to earlier models form other makers, like the Colt Woodsman. 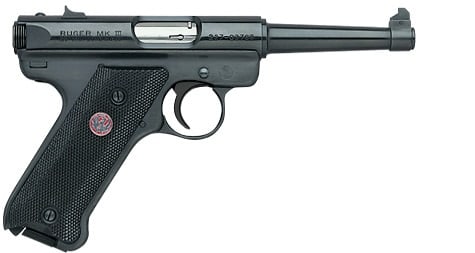 The Mark III comes in a multitude of variations.  As such, the prices differ widely.  With an MSRP of $379, a Standard Mark III can be a fantastic fun gun.  For almost twice that much, you can have a reliable target gun.

The Mark III is accurate, easy to load, and fast to unload.  My Mark III has a barrel that’s more than 7-inches long.  At distances under 30 yards, it shoots as well as most .22 rifles I’ve tried.

But there’s a downfall to the automatic rimfire design.  The .22 is dirty round.  You have to keep these guns clean.  Once they get reasonably fouled, almost all automatic actions get sticky.  It is difficult to pry a stuck case from a barrel.  And these guns have the same issues that all automatics have, regardless of the caliber.  They can fail to feed and fail to eject, and behave differently with different powder loads (in some cases, light loads won’t even cycle the action).

Somewhere between 300 and 500 rounds, my Mark III will start to hiccup.  It seems to be worse when the barrel is hot, when the humidity is high, and when the brass is tarnished.  This isn’t a complaint.  Far from it.  I’ve just learned to keep it clean.

Ruger makes many rimfire revolvers.  My favorite .22 versions are the Single Ten and the SP101.  I have yet to find a rimfire revolver that I think is more versatile than the SP101 in .22 LR. 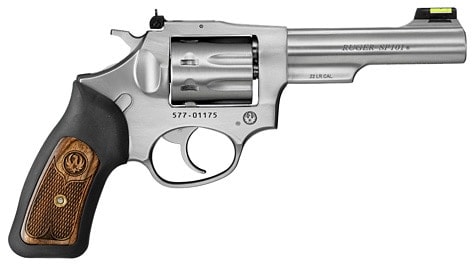 This gun is reasonably sized.  The revolver’s action is inherently more reliable.  When the SP101 is dirty, it can be cleaned with no disassembly.  It is easy enough to load, accurate enough to take small game, and can shoot all varieties of .22 LR ammunition.

The downside is that it only holds eight rounds, and that the cylinder is slower to reload.  And it has an MSRP of $689.  But worth it.  The SP101 is a great plinker and a reliable tool, all in one.

I love my Mark III.  I wouldn’t part with it for anything.  But it is more of a fun-gun for me.  It goes with me when things are not potentially stressful.  It can take a tremendous amount of abuse, but it reaches a point, usually after several hundred rounds, when it starts to hiccup.  And cleaning it is not easy.  In fact, getting the Mark III back together is the most difficult assembly I’ve ever done.  I certainly wouldn’t want to do it in the field.

And that’s where the SP101 shines.  It is meant for kicking around.  It is more than capable.  It is the perfect gun for a tool box or a bug-out-bag.

After selling my dad’s old revolver, I can clearly see I need both.  The Mark III for good clean fun, and maybe a SP101 in case things get a bit dirty. They are both reasonably priced, and the ammo is dirt cheap.