It's real and FPSRussia's got one, the SRM-1216 16-shot automatic shotgun (VIDEO)

The SRM shotguns, unveiled just earlier this year and designed at the request of the U.S. Marine Corps, are now in stores—these 16-shot 12-gauge semi-automatic bullpup shotguns aren’t unicorns.

They’re expensive, they’re high-capacity, and naturally, FPSRussia’s got his mitts on one. Don’t worry, something’s about to explode.

We only have one gripe, well, two, first that fake accent is getting a little long in the tooth, and secondly, we do not think it’s a smart or safe idea to mix self-defense and less-than-lethal ammunition in the same magazine, that’s asking for a lot of trouble. In fact, many law enforcement agencies won’t use the same shotguns for both ammo types.

And most departments won’t use semi-automatic shotguns for less-than-lethal shells anyway. Their light charge isn’t—generally speaking—powerful enough to cycle automatic shotguns, which is why they get used with pump-action shotguns.

That being said, one of the features that stands out about the SRM shotguns is the way they cycle. The SRM-1216 uses a roller-delayed blowback “Sure Cycle” action which promises to cycle a wide array of loads, from light shot to heavy slugs. The action could prove to cycle with less-than-lethal loads as well, which makes this an even more appealing shotgun for law enforcement and military use.

Make no mistake, this is no hunting shotgun—although we have no doubts it would do well in the field. The barrel on the Model 1216 is just long enough to not qualify as a restricted NFA-regulated shotgun at 18 inches, unlike SRM’s two other variants, Models 1212 and 1208, which are NFA-regulated and largely intended for the law enforcement market.

SRM shotguns are especially short because of the bullpup design. The action is behind the trigger and housed in the buttstock, even though the magazine is in front of the trigger. Not only does this make it short, it gives it the softer felt recoil shared by all bullpups. The resulting gun is fast and easy to maneuver, even in tight spaces. The full-size SRM-1216 is just 32.5 inches long and weighs just 7.25 pounds, unloaded. 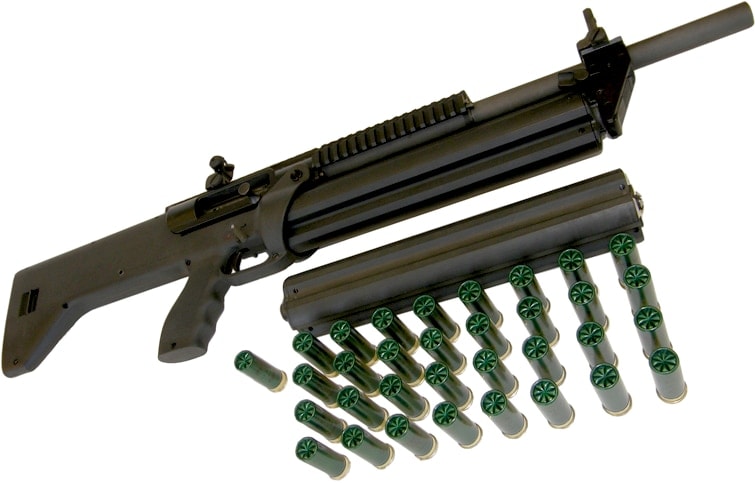 Another feature of the SRM shotguns is the low flattop rail and straight stock. This makes it handle more like an AR-pattern rifle and it in fact is intended to be used with standard-height AR-15 sights. Along with two side rails the SRM-1216 oozes tactical. If that weren’t enough, yes, they have made a full-auto version.

SRM shotguns are chambered for 2-3/4- and 3-inch shells, with each magazine tube holding four rounds for the 1216, and three for the 1212 and two for the 1208. The shooter must manually index the tubes, but it doesn’t take much practice to do it quickly. One interesting benefit from having a “magazine magazine” is that this 16-shot 12-gauge can be California compliant.

It still has requires a tool to load and unload—it looks like they include a simple pin punch—but because each tube only holds four shells, from a legal standpoint, California sees this as a 4+4+4+4+1-capacity shotgun.

We have to say we’re happy to see this unique and extremely compact shotgun in stores. Yes, it is priced at $2,400, and yes, magazines cost $200, but it’s a new product and a new company, and it will take time for them to cover their costs. The shotguns are made to a very high standard for heavy military use, and there isn’t anything else quite like them out there.