Behold the Mightiest Nerf Gun Ever Made, the N-Strike Elite Hail-Fire

A team of dedicated engineers. Years of research and planning. A brilliant designer. A coalition of American and Chinese specialists. Is this the recipe for the next space mission? Cold Fusion?

No, not quite. This is how the Hasbro toy company creates Nerf blasters. Wired recently featured a lengthy piece detailing the full creative process behind the hands-down best weapon for teaching the neighbor kids who’s boss and annoying your older sister. Say hello to my little, plastic friend, the Nerf N-Strike Elite Hail-Fire.

Holy shit. Who knew Nerf guns could be so intense?

This pimped out gun was a concerted effort to beat out Hasbro’s biggest competition: kids. Believe it or not, kids, teenagers and adults with way too much free time on their hands are coming up with Nerf gun mods faster than Hasbro can put new guns on the shelves. It all boils down to safety regulations. Hasbro has to make sure that all of their Nerf guns meet Uncle Sam’s specifications (down with governmental Nerf gun-control!) but consumers have free range to tweak their Nerf guns as much as they want.

So how can Hasbro beat amateur gun modders to the punch? With the help of one man, Brian Jablonski. This guru of plastic guns is the creative mind behind the newest generation of Nerf blasters, kind of like Einstein in the Manhattan Project.

His goal was to build the one gun that every kid at home was trying to build on their own: something that could shoot farther and hold more darts than any other Nerf gun on the market. His epiphany came when he wondered, “Why can’t you have three or four or five clips?”

So, he cannibalized parts from a few different Nerf guns and cobbled them together to create the first Hail-Fire prototype with its unique rotating clip (magazine) system, one that Dr. Richard J. Gatling himself would be proud of. Basically, you pull the trigger and unleash polyurethane hell upon your foes, and then when the magazine runs out you cock the top handle (kind of like an upside-down shotgun) to seat the new mag. 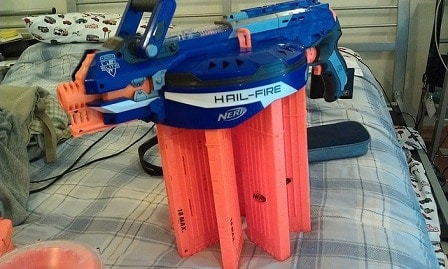 This layout allows a pre-teen warrior to carry 48 darts across 86-dart magaziens, but the Rambo Juniors out there can upgrade to 18 dart extension magazines for a maximum capacity of 144 darts. We’re guessing that these massive, unwieldy magazine extensions follow the philosophy, “Who needs to run when you’re sitting on that much ammo?”

The Hail-Fire has given Nerf fans something to drool over, but that didn’t stop the inevitable from happening. Modders have already begun dissecting the gun to tinker with its plastic guts. They have the technology!

The guy in this video super-charged his Nerf with a beefy set of batteries.

This video shows you how to cram two more darts into the 18-dart expansion magazines because, you know, those two extra darts can make the difference between a decisive victory and a gruesome demise.

The mod in this video shows you how to transform a normal Nerf air dart into a lethal projectile. This mod used in conjunction with the range enhancer mod will probably turn any Nerf gun into a high-powered sniper rifle.

It’s nice to see that Nerf continues to innovate new toys for the kids of America, but they’re going to have a hard time one-upping the Hail-Fire. What’s next? A Nerf fragmentation grenade?